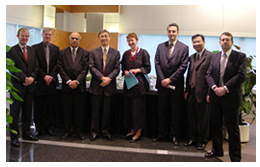 A delegation of consuls-general representing seven countries were greeted by President H K Chang and other senior staff members including Vice-President for Institutional Advancement, Professor Y S Wong, and Vice-President for Planning and Information Services, Mr John Dockerill at the Multimedia Conference Room on 22 March.

The delegation, consisting of representatives from Austria, Canada, Egypt, India, New Zealand, Portugal and Turkey was then given a campus tour and visited the University's Wireless Communications Laboratory, the English Language Centre and the School of Creative Media.

The visitors were impressed by the high-tech research projects, such as wireless communication and nano-technologies, developed by CityU scientists. 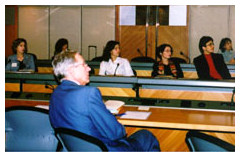