CityU’s annual cultural festival is kicking off this year with an exhibition of ethnic costumes and silverware from nine Chinese minority groups. 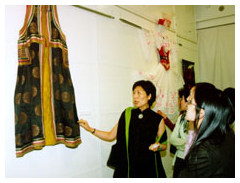 From a private collection belonging to Ms Lee Mei Yin, the exhibition, at CityU Gallery from 20 February 1 April, will display traditional costumes from the Owenk, Manchu, Mongolia, Kazakh, Tibet, Yi, Tai, Li and Miao people. These minorities help make up a total of 55 ethnic groups in China. While some minority cultures have mingled with the dominant Han group, many still preserve their traditional culture and live in scattered remote areas. 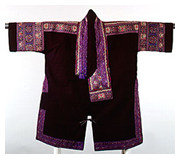 The items displayed at the exhibition include Qing Dynasty royal robes, Miao formal dress, Mongolian wrestling costumes and ethnic wedding dresses. These exquisite materials not only demonstrate elaborate design and workmanship, but also relate the myths, customs and culture of the minority groups. For example, Kazakh's white skirts illustrate the legendary origin of the swan. A careful study of these costumes provides a better understanding of these minorities.

"This is the first exhibition of these costumes in Hong Kong," said Ms Lee, a scholar of ethnic culture. "By studying them carefully, we can understand the different characteristics of the minority groups and their perception of beauty." Ms Lee will also deliver a lecture on ethnic costumes.