"The CSP was organized for 228 students--118 students from Taiwan, Hong Kong and Macau and a further 48 students from the mainland. The other 110 students came from 10 countries worldwide." Mr Cheng said. 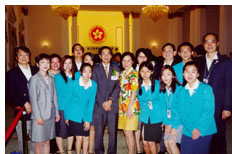 This was a special trip, both for the delegation and for China," Mr Cheng said. "On the first evening, we had only been a few minutes in our hotel in Beijing when we heard the good news that Beijing had won the bid to host the 2008 Olympics." In the hotel lobby, everyone was cheering and some people even burst into tears. Spectacular fireworks burst across the dark sky, adding to the festive atmosphere, and people celebrated until the early hours of the morning. "It was a most emotional moment."