What have been the major developmental trends in Hong Kong's younger generation over the last three years? Have their lives and values been influenced by the economic downturn and increased contact with mainland China? If so, how? To capture the all-round development of youth, including secondary school students, in Hong Kong, and to examine the trends of that development, as well as factors influencing it, Dr Jacky Cheung, Assistant Professor in the Department of Applied Social Studies, has been conducting a Youth Development Indices Research and an Assessment of the Whole-Person Development of Secondary School Students over the last three years. 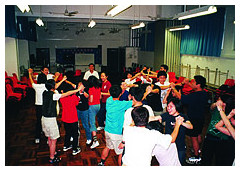 Data on the former have been acquired through questionnaires, and on the latter through telephone interviews. Three questionnaire surveys were distributed to approximately 20,000 students from 24 secondary schools, and the majority of students participated in all three. Phone interviews have been conducted five times since June 1998, with each covering 1,500 randomly selected youth aged from 12 to 24. Half the respondents have continuously participated in the interviews from the second batch to the fifth. 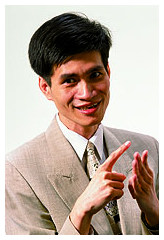 So what have been the major trends in youth development over the last three years? Dr Cheung, whose research focus is on the quality of life and moral development in modernization and post modernization, said, "There have generally been significant increases in nationalist sentiments, breadth of knowledge, inclination towards moral behaviour, leadership skill, and support for democracy, among our young people, with secondary school students also showing increases in the first three aspects. Yet this has been accompanied by a marked decline in their emotional stability, appeal to social progress, and experience of the good life."

Dr Cheung noted also that participation in "healthy" activities, such as those of youth centres and schools, visits to exhibitions, and discussion of social problems with family members, have contributed to the support for democracy, legal consciousness, creativity, independence, and experience of the good life. Conversely, viewing pornographic material adversely affected curiosity for knowledge and quality of conduct. Dr Cheung pointed out that the increase in nationalist sentiments was expected. "Civic and patriotic education in recent years has obviously had its effect on young people. They have also been increasingly exposed to the people and culture of the mainland. This and the many well publicized developments on the mainland, such as the outstanding performance of Chinese athletes in the Olympic Games, have helped to promote nationalist sentiments," he explained. The drop in emotional stability and experience of the good life is linked largely, he said, to the overall socio-economic climate in Hong Kong. He was surprised, however, by the strongly positive effects of visits to exhibitions and discussion of social problems with family, which contrasted with the minimal effects on youth development of discussions of personal and family problems. 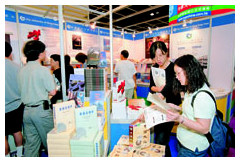 The implications of the findings for youth education are clear. "Activities which have been shown to have desirable effects on youth development, such as extracurricular activities in schools and youth centres, should be encouraged. Visits to exhibitions and sports should be promoted as a means conducive to the whole-person development of young people. And moral education, service to the community and school, and leadership training, which have shown their expected contributions to different dimensions of youth development, should be continued," Dr Cheung said.

Difficulties in research
The project posed certain technical difficulties, as it required persistent and immense support from the schools in administering the questionnaires. "Collecting the 60,000 cases was no easy task," said Dr Cheung. "A lot of effort was put into liaison and arranging time for the assessments." The massive amount of data collected also demanded much time and huge computer capability for analysis. A computer run of a single variable took several hours. And a sophisticated statistical analysis for the whole set of youth development indices meant Dr Cheung spent several days waiting with baited breath--worthwhile wait though, considering its many revelations about our young people.