Every step counts: the path to cross-cultural understanding

CityU's Wei Hing Theatre was packed on the evening of 12 October for the Public Launch of the Centre for Cross-Cultural Studies. Following welcoming remarks by CityU President Professor H K Chang, Professor Matthew Chen, Dean of the Faculty of Humanities and Social Sciences reminded the audience of the importance of cross-cultural understanding, especially in the light of current events. "This Centre is destined to thrive and prosper for the benefit of CityU and Hong Kong," Professor Chen predicted. 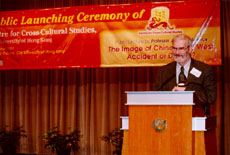 For his part, Professor Zhang Longxi, Director of the Centre for Cross-Cultural Studies, told the audience that he was very happy and excited that the Centre would contribute to East-West studies. "To be able to study history, philosophy, art, religion and the humanities combined as culture in the broad sense, and not just Chinese culture but Western culture and cross-cultural interactions - this for me is like a dream come true."

Finally, Monsieur Jerome Pasquier, the Consul-General of France, congratulated CityU on the official launch of the Centre. M Pasquier told the audience that cross-cultural studies were more important than ever and that in promoting understanding between people the Centre "will be good for Hong Kong, good for the West and good for China."

A public lecture by Professor Jonathan Spence, Sterling Professor of History at Yale University, followed the official opening. One of the foremost scholars of Chinese history from the 16th century to the present, Professor Spence is the author of many books, including The Search for Modern China, The Chan's Great Continent: China in Western Minds and, most recently, Treason by the Book.

Attempts to organize images of China
However, he said, the sheer volume of the contacts and interconnections with China led scholars of the 17th and 18th centuries to attempt to organize the data into schemas that allowed them to make sense of the information. In his recent book Ideographia, David Porter focuses on four major organizing structures, all based on 17th and 18th century images of China in the West and all of which took the same pattern: an initial feeling of intense belief and admiration, followed by a feeling of intense disillusion and disappointment. It is these structures, Professor Spence said, which give a 21st century perspective to making sense of the records.
Dr Porter's schema are: the discovery of a key that would allow scholars to unlock Chinese culture and understand the principles that lay behind the language; the discovery of organizing principles in Chinese religious history that would support Christian monotheism; the perception of China as an edifice of social and administrative order and economic rationalization; and chinoiserie, the cult of "Chineseness" in France, the UK, Germany and Scandinavia.

The clash of mighty opposites
It was the shattering of these dreams, according to Dr Porter, that led to the Western disillusion with China that set the stage for the subsequent complicated relationship with China which has persisted over the following centuries.

However, Professor Spence argued, the problem with this interpretation is that it does not allow for counter-themes: there was no period in which there was innate hostility to China in the West which did not also contain scholars who admired China. Using the metaphor of "mighty opposites", also the title of a book by Professor Zhang Longxi, Professor Spence said, "I'd like to suggest in thinking about this clash and tension and admiration with Chinese and Western images, particularly images of China within the West...not to be too busy searching for overarching schemes that explain everything."

He believes in genre-driven research that looks at the nature of what people are trying to do before labelling them either favourable or hostile, or a negative version of imperialism or Orientalism. "We must continue to study and think about China so that as the most cultivated and distant peoples stretch out their arms to each other those in between may be gradually be brought to a better way of life. May that be a goal and achievement of your new Centre."