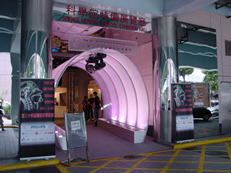 City University of Hong Kong is renowned for its many collaborations with industry, but it also contributes to the community by fostering academic co-operation among local and overseas schools.

That is why the Department of Electronic Engineering (EE), together with 24 schools and four overseas delegations, demonstrated their latest projects at the 34th Joint School Science Exhibition, "Miracles in Life", at the Hong Kong Science Museum from 3 to 9 August.

Two research projects, a 3D Screen Adapter for Domestic Television and a WAP-based Intelligent Theatre, were illustrated at the EE booth. The screen adapter, placed in front of a television set, produces 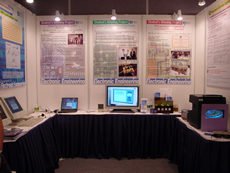 three-dimensional pictures with a low-cost polarized lens. Its application can benefit the film, video game, and Internet industries. Principal Investigator and Associate Professor of Electronic Engineering, Dr Peter Tsang, said the adapter is still in the research progress and the patent application has been filed.

Dr K F Tsang, an Associate Professor of Electronic Engineering, developed the WAP-based Intelligent Theatre. It helps control electronic devices inside houses or offices anytime and anywhere. Through a mobile phone, users can access and manipulate home devices by the WAP system. At the EE booth, visitors can try out the wireless network.