What they are reading...

In this issue of Linkage, Professor David Randall, Chair Professor and Head of the Department of Biology and Chemistry, and Mr Arthur Leung, Director of Campus Planning, chat to us about their favourite authors and what they are currently reading.

Professor David Randall
When We Were Orphans, by Kazuo Ishiguro 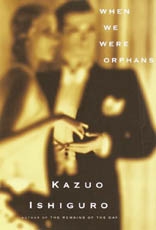 When Professor Randall was an undergraduate, he was a big fan of Russian novelist Fyodor Dostoyevsky and his favourite novel was The Brothers Karamazov. Now Professor Randall is more partial to The Idiot. "His writing was the best, he had a clear understanding of the nature of people, and his books showed deep psychological insights," he said.

Currently Professor Randall is reading When We Were Orphans, by Kazuo Ishiguro. The book revolves around the story of an Englishman obsessed with the disappearance of his parents in Shanghai when he was a child. The result of this obsession is a journey into the confused memories of the protagonist.

Professor Randall finds this book interesting because of the way the author depicts the maze of human memory. "I love Kazuo" book because of the detached way he describes things and the central stupidity of his characters," he said.

Although the main reason he reads is for interest and relaxation, Professor Randall also believes that reading is essential for growth. "Reading gives you insight into the ideas of others and helps you to formulate views of your own," he said.

Be it Emmeline Pankhurst leading the fight for women's voting rights in 1908, David Lloyd introducing socialism to Britain, or Winston Churchill rousing the British to war, the speeches of great leaders reflect the times, and show the political and social situations of a given country. Mr Arthur Leung, very much enjoys reading the newly revised edition of The Penguin Book of Twentieth Century Speeches.

"There are many quotes from well-known and well-written speeches made by world leaders a century ago. The speeches discussing economy, human rights, freedom, wars and civil rights have caused me to see the another side of the world and reflect a lot," he said. "Though their words were spoken sometimes a hundred years ago, they are still true today."

Mr Leung couldn't resist showing us the book he loves so much, or quoting from some of his favourite speeches: "The only thing we have to fear is fear itself." (Franklin D Roosevelt, 1933); "If we open a quarrel between the present and the past, we shall be in danger of losing the future." (Winston Churchill, 1940); "If a free society cannot help the many who are poor, it cannot save the few who are rich." (John F Kennedy, 1961); and "Only the dead have seen the end of war." (Plato)