Art with a difference 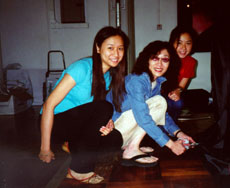 Millie Chan's exhibit, Disintegrate The Simultaneous Dress, featured a two-by-four-metre area wrapped in dark cloth. Outside the room, several white T-shirts were placed on the floor, and a viewing screen hung on a wall. Inspired by the tunnel linking CityU and Festival Walk, Chan said her multimedia boutique allowed visitors to design their own clothes, which were then shown on the display screen by an overhead projector. 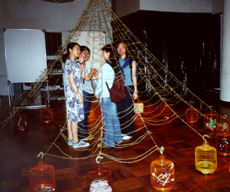 Chan's exhibit, part of the Installation Works Exhibition by second-year Honours students at the School of Creative Media (SCM) on 15-18 May, reminded visitors that themes such as Culture and Identities-this year's topic-can be expressed just as effectively through multi-media, rather than print and film.

The exhibition, which presented 27 different designs, was the first installation work of its kind at CityU. 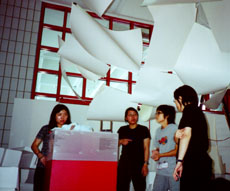 After visiting the exhibits, Wing, a first-year student, said the installation was very interactive. Out of all the productions, she found Jail-which used birdcages, cotton, plastic strings and paper to present the theme of Techniques of Self / Technology of Power-the most impressive.