Applied R & D will get boost from Shenzhen 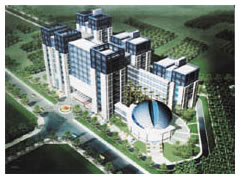 For years, the thin gauze of atmosphere surrounding the earth hampered astronomers from studying the most distant stars in our cosmos. But the Hubble Space Telescope, fixed in the clarity of space, has lifted that veil. It is our outpost to the universe.

Mr H Y Wong, Director of the Industrial Business and Development Office (IBDO), likes to use the Hubble analogy to describe the importance of CityU joining the Shenzhen Virtual University Park (SZVUP) this past December. 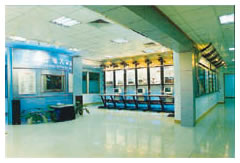 "Chinese mainland is still foreign to some of us," said Mr Wong, whose office is responsible for ensuring that CityU research is promoted through close collaboration with the business community and the public sector. "SZVUP is our outpost to Chinese mainland and the Chinese market. This is a brilliant idea that will help us develop more opportunities."

It aims to act as a window that will commercialize academic research, provide a high-level training base, and promote co-operation and communication among academia and business.

Earlier this year, Mr Wong sent out a call for research proposals that will be considered for the SZVUP incubation programme. 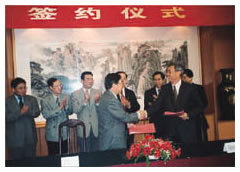 Each project chosen for incubation in Shenzhen will be funded by the University for two years. Afterwards, the project must become self-sufficient. In the meantime, the University has earmarked HK$50 million to the development of applied research at the SZVUP. CityU's office at the virtual university should be up and running by July.

"We need to bring investors into the project as soon as possible," said Mr Wong. "But the important thing is that the projects we choose are marketable. We've hoping that in a few years' time we can incubate a few viable companies."

A bridgehead onto the mainland

CityU President Professor H K Chang concluded the enrolment agreement with Vice Mayor of Shenzhen, Mr Guo Rong Jun, on 20 December 2000. A representative office in the SZVUP will be launched as a co-ordination centre for CityU's mainland activities, which include R&D projects, business incubation for CityU's subsidiary/associate companies, partnerships with other bodies on the mainland, continuing education and professional training, and the commercialization of CityU's research capabilities.

Vice-President for Institutional Advancement, Professor Y S Wong—who initiated the idea of linking up with the virtual university-said there were three important reasons for joining the SZVUP. "Number one, CityU already has many scientists from China working on research projects-but they often leave after a couple of years. Now they can stay with us," said Professor Wong."Secondly, China is a huge market, especially in high technology goods and services. By joining the SZVUP, we can better cultivate that market. And last, but not least, China has a large pool of talent in all kinds of areas. By doing R&D in Shenzhen we can tap into this huge source of talent."

Although Professor Wong is in charge of the overall project, Professor P S Chung, Vice-President (Research) will be responsible for the research operations at the SZVUP. Professor Chung said CityU's presence in Shenzhen will act as a bridgehead onto the mainland.

He also stressed that CityU is not only interested in high-tech research possibilities. Although the main concern right now is attracting potential projects from CityU in biotechnology, information technology, electrical engineering, as well as in the building and construction areas, Professor Chung is hoping the centre will extend into the business sector as well through the University's acclaimed Interactive Master of Business Administration (iMBA) programme.

"In the beginning, our focus may be on high-tech, but the SZVUP won't be confined particularly to high-tech," he said. "On the social sciences side, for instance, there is also scope for establishing a presence there. Maybe the Institute of Chinese Linguistics will be interested in the high-tech aspects of their research there. There might also be some interest from the Applied Social Studies Department, because they can do some valuable social work in Shenzhen."
CityU has reserved 200 square metres of office space and will employ two staff from Shenzhen at the SZVUP. An office manager has already been hired. The University plans, in the future, to expand this presence further with an
R & D centre.

To date, the park has trained more than 800 qualified personnel in a dozen specialities ranging from computers, telecommunications engineering, integration of machine building and electronics, and financial management to business management. It has also introduced over 60 high-tech research achievements used in industry, injecting vitality to high-tech industrial development in Shenzhen.

Liu Yingli, deputy secretary-general of the Shenzhen City People's Government, said the park is not simply a place for online education, but an educational base for multi-level training courses. The park's main building has a combined floor space of 17,000 square metres, and includes rooms for lectures, reading and meetings, along with service systems, telecommunications network systems, as well as scientific and technological workshops.

The park's administrative centre has signed agreements with three Shenzhen banks to provide financial support to its members.