The Nobel Prize and Chinese Literature 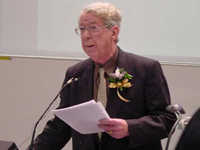 Many Chinese readers have felt disappointed in the past that no Chinese writer has ever been awarded the Nobel Prize. Unexpectedly, at the beginning of the new millennium, the Nobel Prize in Literature travelled across languages and cultures from distant to arrive, for the first time, in the hands of a Chinese writer--Gao Xingjian. Since the news was announced in early October last year, it has caused heated discussions about the Nobel Prize and Chinese literature among Chinese communities.

The most appropriate person to talk about this subject is undoubtedly Professor N G D Malmqvist, the senior selection committee member for the Nobel Prize in Literature. CityU's Chinese Civilisation Centre and the Ming Pao Monthly Magazine invited Professor Malmqvist to our campus, where he delivered a lecture on 16 January. The lecture attracted a large audience, not to mention a number of reporters from the media.

Professor Malmqvist, 76, is a renowned Swedish Sinologist who has made a significant contribution to cultural exchanges between and for over 50 years. In the 1960s, he founded the Department of Sinology at Stockholm University. Elected Fellow of the Swedish Academy in 1985, he has since then taken part in the annual selection process for the Nobel Prize in Literature. Among the 18 Fellows of the , he is the only person who is literate in Chinese. Professor Malmqvist has translated over 700 Chinese publications into Swedish, including 95% of Gao Xingjian's works. Were it not for Professor Malmqvist, it is unlikely the would have been able to sufficiently appreciate Gao's works to award him the highest honour in the world of literature. 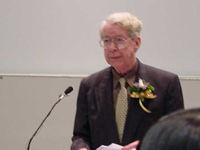 In his lecture, Professor Malmqvist explained the objectives of the Nobel Prize, the selection criteria and the selection process, and mentioned some of the stories and rumours about Chinese literature and the Nobel Prize. He explained that the winner is selected by the 18 Fellows of the Academy. Every three years, the Academy chooses five Fellows to form the selection team for the preliminary appraisal of recommended literature in the following three years. Each autumn, they invite people and institutions from around the world to nominate candidates. However, the following people do not have to be invited to nominate Nobel Prize candidates: Fellows of the , university professors and associate professors of literature and philosophy, previous Nobel Prize winners, and chairmen and vice-chairmen of prominent writers' associations world-wide.

The recommendation letters should arrive at the Academy by 1 February, Professor Malmqvist explained. From about 400 letters, the selection team begins the preliminary appraisal process. Meetings are held every four weeks and six finalists are selected by the end of May. The team then asks the librarian of the Nobel Library to verify the information about the finalists and compile a report for each of them. During the summer, the Fellows then carefully read the works of the finalists.

In September, the Academy resumes its monthly meetings, where the selection team members comment on the major works of each finalist. And as all the Fellows are free to make their own choice of the award winner, there are often heated debates until early or mid-October, when the Fellows finally cast their votes to select the winner.

Why Chinese writers have had to wait until 2000 to receive the Nobel Prize in Literature? Professor Malmqvist says is attributable to the few quality translations of good Chinese works and the adverse effect on creative activity of the unstable social and political situation in . Among the Chinese writers before 1949, he thinks Lu Xun is the best. If Lu's major works had been translated into major English or other foreign languages at that time, he would definitely have been nominated and would probably have won the prize. Of the more recent Chinese writers, Professor Malmqvist highly commends Shen Congwen, who was nominated a finalist in both 1987 and 1988. He believes that if Shen had not died in May 1988, he would have received the award.

After years of studying in contemporary Chinese literature, Professor Malmqvist finally discovered Gao Xingjian, a Chinese gem who deeply moves the human soul. The Academy? decision to confer the prize on Gao was mainly based on his novel and his plays that were published in the 1990s, after he migrated to . "Gao's is far better than One Man's Bible," said Professor Malmqvist. "For those who have not read any of Gao's works, they should start with and Gao's plays and read One Man's Bible last."

In his lecture, Professor Malmqvist pointed out that after Gao's winning of the Nobel Prize, western readers are certain to pay more attention to Chinese literature, he believes, and he predicted that there will be more Chinese writers winning the Nobel Prize in the future.