CityU Scholars is set to promote the achievements of faculty members, facilitate reporting information to the government, enhance the efficiency of internal reporting, and eliminate duplication, according to Professor Lu Jian,Vice-President (Research and Technology) (VPRT) and Dean of Graduate Studies at City University of Hong Kong (CityU).​​​​​​​​​​​​​ 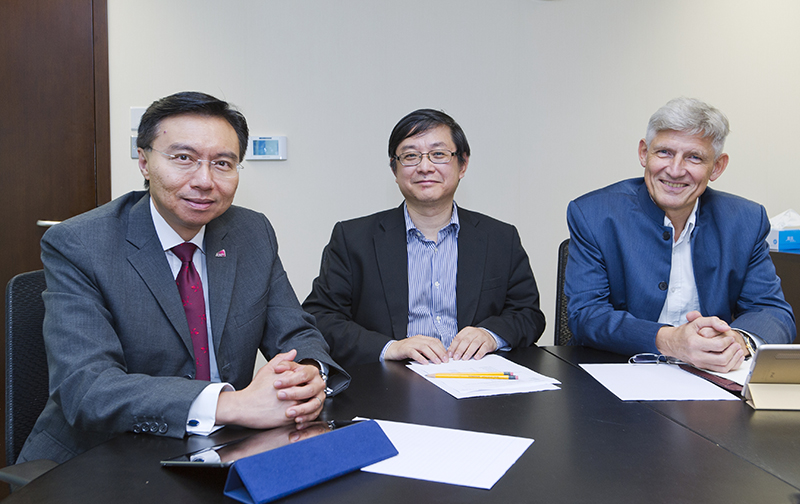 ​Professor Lu is co-chair of the committee that has been overseeing the development of CityU Scholars, a portal aimed at demonstrating CityU’s research excellence.

“One of the great strengths of the new system is the ability to streamline corresponding administrative procedures such as performance appraisal and government reporting by reusing information from the single source of truth,” Professor Lu added.

A soft launch for the system has been underway since 18 April 2017, with the official launch occurring on 30 June 2017.

The new system was developed in response to calls from colleagues who previously were required to repeatedly provide data that was quite similar, albeit in slightly different formats. For example, the Performance-based Pay Review system required data on publications, grants, and so forth, as did the Office of VPRT's data collection exercise. The repeated data collections were time-consuming, error-prone, and led to frustration.

“We consider the CityU Scholars system as an important step towards work simplification,” commented Mr Sunny Lee Wai-kwong, CityU’s Vice-President (Administration). “CityU is actively looking for ways to re-engineer workflows and lower the administrative burden on staff. CityU Scholars will do so by feeding validated performance data directly into the e-APR forms that academic staff have to complete.”

So one fundamental objective has been to re-engineer the effort by collecting the data just once, ideally at the source, such as the publisher.

“Academic staff would then only need to make moderate updates and additions, while the data could be used for all reporting and decision-making needs,” said Professor Christian Wagner, Chief Information Officer and committee co-chair.

Other motivations included the need to replace old software in order to raise the level of data accuracy and security and, from a competitive perspective, the realisation that other local universities were using scholarly information to showcase their research capability.

“Research activity is a key driver at CityU and the new system is highly effective at showcasing our success,” Professor Wagner emphasised.

Putting the system into play has been a highly complex undertaking. “The major challenge was the need to redesign the data collection, validation and reporting process and to successfully engage the many stakeholders involved in data cleansing and workflow reengineering, all under a very tight timeline and resource constraints,” explained Professor Wagner.

“We needed to coordinate between the Research Grants and Contracts Office (RO), which has to report research output; the Library (LIB), which focuses on data quality and access; Enterprise Solutions Office (ESU), as service provider; academic staff, as system users and data providers; academic management, as data user for planning and decision making; Human Resources Office, as user related to performance appraisal; as well as other parties,” he said.

Another challenge was to ensure that the new system would not only replace the previous system used to record research information at CityU, but also to add value to the public, academic staff, administrative offices, senior management and the University as a whole.

Equipping academic staff with the ability to effectively use the system and gaining their acceptance were recognised as key elements of success. The project team, composed of RO, LIB and ESU staff, conducted various promotion exercises, including a roadshow to senior members, academic and administrative users before the soft launch.

To ensure a smooth transition, training classes with hands-on practice, drop-in clinics and tailor-made training sessions are provided to equip all users with the ability to competently deploy the CityU Scholars system, according to Ms Lisa Kwan Lai-sheung, University Librarian. Staff who missed out on the training programmes will be able to refer to the detailed user guides the Library has prepared.

“Upon the official launch of the system, we will initiate an outreach programme whereby CityU Scholars ambassadors will provide faculty members with on-site assistance in their offices,” Ms Kwan added.

Ultimately, CityU Scholars is about creating a highly streamlined single workflow and single source of truth where all the research outputs of a faculty member can be accessed conveniently and with a minimum of administrative effort.

“The new system is one of a kind in Hong Kong and it will greatly reduce the amount of time colleagues have to spend on administrative duties while providing a very useful, user-friendly means of compiling information about scholars,” said Professor Lu.

“With a single truth as the starting point for collecting data we can make life easier for everyone. So I would like to especially thank the project team members from RO, LIB and ESU for their hard work and great contribution to the success of the system,” he added.​​​​​​