Deep Focus: New media art exhibition on an expedition to the Coral Triangle 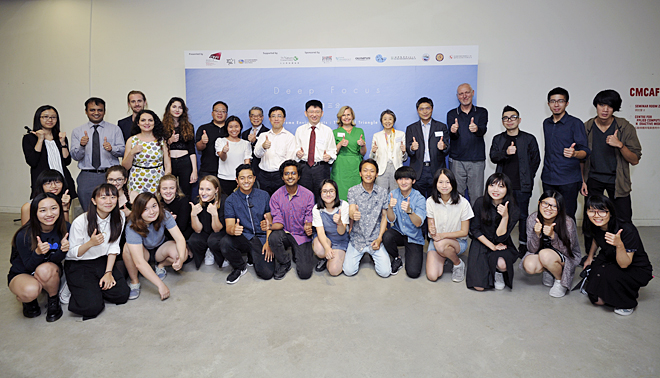 Guests and students at the opening ceremony of the “Deep Focus” new media art exhibition.
​Creative media students from City University of Hong Kong (CityU) have transformed data they collected in an expedition to the Coral Triangle in the western Pacific into 17 unique artworks, which present some of the complex relationships between humans and nature.

The artworks will be featured in an exhibition titled “Deep Focus”, which will be held in the Run Run Shaw Creative Media Centre on 19-25 April.

Nineteen art and design students participated in the Coral Triangle expedition in late February, as part of CityU’s Extreme Environments Programme. They scuba-dived off the Sipadan and Mabul islands in Malaysia to investigate the rich coral reefs there, and trekked in the remote western region of the Solomon Islands to study the culture and ecosystem threatened by rising sea levels. They explored caves, coral reefs and shipwrecks, tagged turtles in the ocean, and paddled through thick mangrove forests.

Using light projection, sound programming, field recording and other technologies, the students captured environmental, ecological and sociological data during the trip and turned the images, sounds, stories and scientific readings they collected, as well as their personal experience, into artworks when they returned to Hong Kong. Presenting their artworks in formats such as animations, video installations, interactive shadow installations and earthwork sculptures, the students hope to raise public awareness about nature conservation.

Speaking at the opening ceremony of the exhibition on 18 April, Professor Gary Feng Gang, Acting Provost of CityU, said “The Extreme Environments Programme is a good example of how the Discovery-enriched Curriculum enables our students to engage in exploration and research, demonstrate their creativity, initiate original work, and thus, make a valuable contribution to society.”

He added that the expedition had been a life-changing experience for the students, and he wished them continued courage and success in their adventure of discovery.

The students trekked in the remote western region of the Solomon Islands , and scuba-dived off the Sipadan and Mabul islands in Malaysia.
The Extreme Environments Programme, initiated by Mr Scott Hessels, Associate Professor of the SCM, was held for the fourth time this year. The Coral Triangle expedition was co-organised with CityU’s State Key Laboratory in Marine Pollution (SKLMP), and was supported by The Nature Conservancy (TNC) which arranged for the students to perform field studies in a protected region on the Solomon Islands.

Dr Leo Chan Lai, Associate Director of SKLMP, said the expedition provided students with the opportunity to dive in the delicate coral reef ecosystems and to better understand their fragility and the serious threats they face.

Ms Louisa Ho Cheung-lui, Executive Director of TNC Hong Kong, said TNC was delighted to participate in the programme. “The students have done a wonderful job of capturing the beauty of this remote paradise through the lens of urban art and technology, highlighting the fragility and urgency of the islands’ survival. This project is a great example of the different ways in which young people can be ambassadors to promote a greener, more sustainable future,” she said.

Coda Ho Hor-yeuk, a Year 2 student in the SCM, studied temperature changes on the islands and their impact on the hatching of turtles. She lamented the serious damage to the ecosystem due to the illegal felling of trees and rising sea levels. “During my days on the islands, I witnessed the delicate relationship between local people and nature and how they coexist with nature,” she said.

The projection of the shadows of leaves on sand in her interactive installation suggests that the atmosphere is like a shelter, which is protecting us and all other living creatures.

Martha Hatch, a Year 1 student in the SCM, made animal bone ashes into a substratum for coral reefs and placed it off Malaysia’s Mabul Island to attract and grow coral and become part of the living reef over time. She also produced an earthwork sculpture to advocate a new type of burial system that is both environmentally responsible and poetically connected to generating new life.

“Mabul Island’s water quality is very different from that of Hong Kong. I cannot see clearly underwater when I dive in Hong Kong, but the water in Malaysia is so clear that coral flourishes, which is fascinating,” she said.