Professor Kuo talks about ‘soulware’ in higher education in Beijing 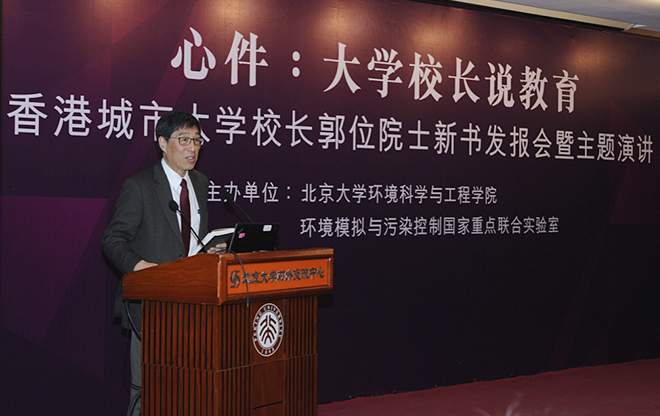 Professor Kuo used lively stories to explain the importance of having the right “soulware”.
Internationalisation is a fait accompli and constantly deepening. Universities in Hong Kong, Taiwan and mainland China have kept abreast of international standards in the hardware and software development in the midst of global competition, and have made tremendous progress in various international rankings. But there are still hardly any universities that can really be honoured as first class with badly needed innovative talent. Why?
“The reason for this lies in the lack of proper ‘soulware’,” said Professor Way Kuo, President of City University of Hong Kong (CityU), who delivered a talk on 12 April at a launching ceremony for his recent book Soulware within Higher Education (“Soulware”) at Peking University (PKU). Soulware, he said, refers to “a type of culture, mentality, behaviour and thinking pattern, a kind of quality to be bred and cultivated over a period of time”.
“By soulware, we are talking about getting rid of the ‘smog’ of the mind,” Professor Kuo said.
The event, organised by the College of Environmental Sciences and Engineering (CESE) and the State Key Joint Laboratory of Environment Simulation and Pollution Control of PKU, was presided over by Professor Zhu Tong, Dean of CESE. The talk was presided over by Professor Lu Jian, Vice-President (Research and Technology) of CityU. Also present at the event were Professor Wang Jie, Vice-President of PKU, who delivered a welcome speech, and about 200 PKU teachers and students, academics, scientists and engineers from the Chinese Academy of Engineering (CAE) and other institutions, as well as CityU alumni and exchange students in Beijing.

The talk was presided over by Professor Lu Jian, Vice-President (Research and Technology) of CityU.

Professor Kuo offers a copy of his new book to a PKU student and teacher.
Professor Kuo is a member of the US National Academy of Engineering and a Foreign Member of CAE. Divided into 28 chapters, “Soulware” illustrates the direction of higher education development across the Strait in four major areas: higher education internationalisation, the integration of teaching and research, quality and evaluation, and creativity and innovation. The book has been published simultaneously in Beijing, Taiwan and Hong Kong by Citic Press, Commonwealth Publishing Group and Commercial Press, in addition to a scheduled Japanese language edition, which is a rare phenomenon. All royalties will be donated to student scholarships.
Professor Kuo noticed how Hong Kong lacked innovative achievements in spite of Hong Kong people having high IQs; how Taiwan was driven by extreme populism in the management of its funds; and how mainland China needed to improve in the area of integration of teaching and research in spite of its abundant labour force. He pointed out that, judging by the best practices in world-class American universities, the key factors for success in higher education are an independent academic environment free from political interference, dual emphasis on teaching and research, collaboration with industry, diversification, a merit system, empowerment, peer review, promotion of innovation and creativity, and governance of academic affairs by professors (different from university governance). These elements are exactly what is lacking in universities across the Strait.
Professor Kuo told a number of thought-provoking stories during his speech before he concluded that a great deal of our problems would be solved if the higher education sector across the Strait could commit to the following three areas: increasing teaching and research investment and promoting free competition; reviewing existing higher education administration and rooting out conflicts of interests; leaving matters to the discretion of professionals with policy assurance, upholding innovation and staying away from nano-management.
Professor Kuo was also invited by Professor Xu Huibin, President of Beihang University (Beihang), to deliver a keynote speech on 13 April for the administrators at Beihang on the meaning of internationalisation and mistakes to avoid in building first-class universities. He also signed an agreement with Professor Xu, renewing collaboration between CityU and Beihang. That is the tenth speech Professor Kuo has delivered on “Soulware” across the Strait in the last six months.
While in Beijing, Professor Kuo also talked about the future development of higher education and research on China Central Television​ and China National Radio.

An agreement was signed to renew collaboration between CityU and Beihang.