CityU students’ voyage of discovery to the Coral Triangle 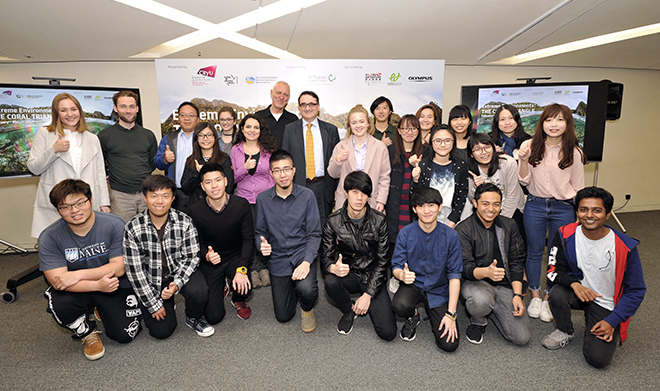 Students and researchers from CityU’s School of Creative Media and its State Key Laboratory in Marine Pollution, respectively, are ready to take off.
Tracking freshly hatched baby turtles, monitoring rising sea levels and using animal bone ash to make substratum for coral reefs are just some of the exciting activities that a group of intrepid student artists and underwater researchers from City University of Hong Kong (CityU) will undertake during an expedition to the Coral Triangle in the western regions of the Pacific Ocean.

Twenty-eight interdisciplinary students and faculty from CityU’s School of Creative Media (SCM) and its State Key Laboratory in Marine Pollution (SKLMP) will exploit pioneering hi-tech creative media art to present and interpret the environmental, ecological and sociological data that they collect on the trip, which begins on 23 February.

“The students will be encouraged to make original discoveries during the 12-day adventure,” said Professor Richard Allen, Dean of SCM, “The expedition is a perfect example of how our Discovery-enriched Curriculum enables students to learn what it means to create new knowledge through discovering, innovating and creating.”

The group will separate into two teams. The Island Team comprising 15 members from SCM will study pollution, rising sea levels and any correlation between endangered species on the Solomon Islands. They will work closely with scientists from the leading conservation organisation The Nature Conservancy, which will be on-site to ensure the culture and fragile nature of the remote islands remains protected.

The Dive Team, comprising the other students and members of SKLMP, will investigate the health status of the coral ecosystem under global climate change and the distribution of benthic and epiphytic toxic micro-algae (BETA) at Mabul and Sipadan Islands in Sabah, Malaysia. 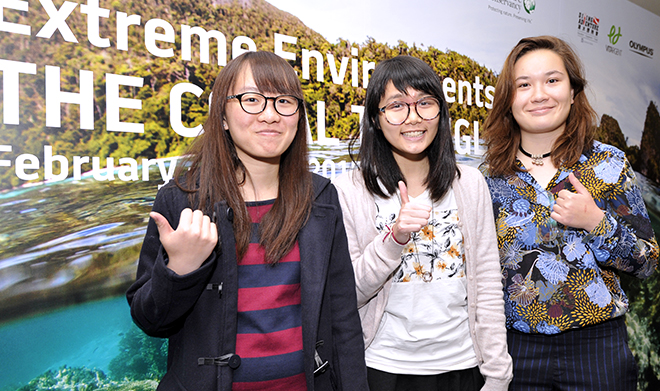 (From left) Year 1 student in Creative Media Esther Man Nga-lok will study the impact of rising sea levels on microorganisms; Year 1 student Martha Hatch will use animal bone ash to make substratum for coral reefs to explore the possibility of underwater cemeteries; and Year 2 student Roxanne Dai Lok-sze will track freshly hatched baby turtles.
The projects and activities proposed by the students include identifying threats from nature and humans that affect the survival of hatched baby turtles; collecting and culturing bacteria and microalgae from the coral ecosystem, mangroves and freshwater streams in order to examine the impact of pollution, global warming, rising sea levels on microorganisms; and using 3D printing technology to make animal bone ash into a substratum for formation of coral reefs so as to explore the possibility of underwater cemeteries in Hong Kong.

Mr Scott Hessels, Associate Professor in SCM and the executive producer of the programme, will guide the students throughout this adventure.

“The students will transform their experience into a range of new media arts presentations such as interactive light installations, animations, 3D-printed sculptures and other formats. These exciting artworks will be showcased at a later exhibition with the aim of enhancing public awareness about conservation,” he said.

Esther Man Nga-lok, a Year 1 student in Creative Media, said the trip would be a once-in-a-lifetime chance to explore an unspoiled spot on earth. “Life in a highly developed city like Hong Kong is comfortable yet confined. I hope that this trip can widen my horizons and empower me to step outside of my comfort zone,” she said. 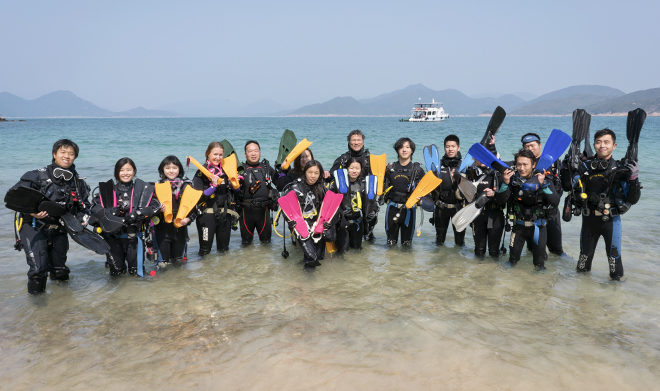 Students trained to dive before the expedition.
Led by its Associate Director, Dr Leo Chan Lai, SKLMP will research the occurrence and distribution of BETA in Malaysian waters. In addition to the potential role in inducing seafood poisoning in humans, BETA are associated with mortality among crustaceans, sea urchins, and other fish and marine mammals.

With safety a priority, scientific and technical diving advisers from SKLMP have arranged scuba diving training in preparation for the trip.

The Coral Triangle expedition is part of SCM’s Extreme Environment programme, which has provided other opportunities for students to explore extreme spots on earth, including the Mojave Desert in 2012, Antarctica in 2013 and the Tu Lan cave system in Vietnam in 2015.