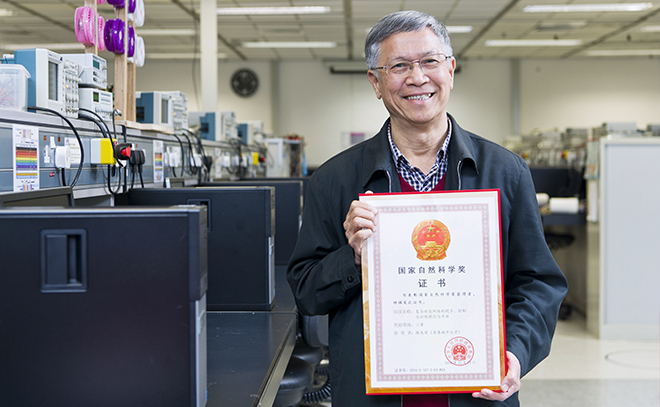 Professor Ron Chen Guanrong, Chair Professor in the Department of Electronic Engineering at City University of Hong Kong (CityU), was conferred a second-class award under the 2016 State Natural Science Award (SNSA) in recognition of his fundamental achievements in the field of network science.
This is the third time that Professor Chen has received the second-class award under the SNSA. He previously won the same award in 2008 and 2012.
Network science, an emerging academic discipline, has tremendous potential for an array of applications, including internet efficiency, financial stability and even national security.
Professor Chen, as a pioneering researcher in the field, has helped establish a leading role for CityU in this discipline in the greater China region.
His latest project, titled “Complex dynamic network synchronisation, control and identification theories and methodologies”, is a joint research project with Professor Lü Jinhu from the Academy of Mathematics and Systems Science, Chinese Academy of Sciences; Professor Yu Wenwu from Southeast University; and Professor Lu Junan and Dr Zhou Jin, both from Wuhan University. 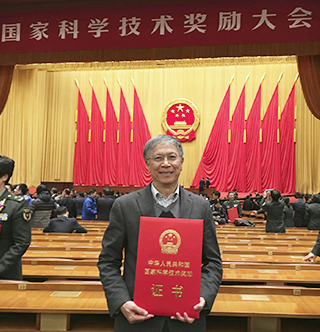 Professor Chen received the award at the Great Hall of the People in Beijing.
Professor Chen was a co-supervisor for Professor Lü’s PhD dissertation in 2002. He also supervised Professor Yu’s PhD degree at CityU. Professor Yu completed his doctoral studies in 2010.
Professor Chen introduced research on network science to Hong Kong after joining CityU in 2000. He later extended his pioneering endeavours to mainland China. A significant body of his work involves the integration of the studies of live networks in the field of electronic engineering with graph theory in applied mathematics. The aim is to analyse data in various real networks in such as communication, power, transportation, biology and society.
His research results potentially have long-term social benefits. They can be used to track computer viruses disseminated on the internet, identify the sources of infectious diseases in humans, and even predict certain financial crisis.
“Networks are everywhere and society is becoming more complicated. I hope students can conduct excellent research in this field in order to make important contributions to society in the future,” Professor Chen said.
Professor Chen said he was delighted to receive the award since it affirmed his hard work and research achievements. He said he was grateful to CityU for encouraging innovation and providing the necessary resources and support.
SNSA is one of the five award categories under the State Science and Technology Awards, which are administered annually by the State Council of the People’s Republic of China (PRC). It is the most prestigious award in natural science, giving recognition to scientists who have attained outstanding achievements in fundamental or applied research in this field. The awards are presented once a year by national leaders including the President and the Premier of the PRC.