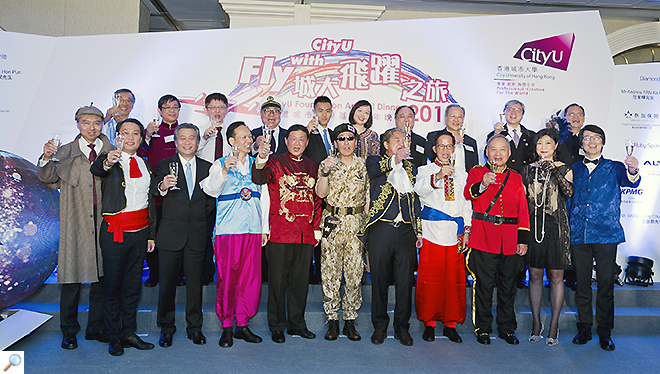 Members of the organising committee for the dinner, the Board of Governors and the CityU senior management team start the dinner.

A joyful annual dinner for the City University of Hong Kong Foundation (CityU Foundation) on 22 November thanked all members and friends for their staunch support over the years.

Under the theme “Fly with CityU”, more than 400 guests dressed up in unique costumes to raise over HK$10 million for overseas exchange and internship programmes, breaking the records of similar events.

The dinner kicked off with the Chinese song Descendants of the Dragon performed by eight non-local CityU students. Two alumni wearing cabin crew outfits were the masters of ceremony. They invited the three “captains”, Mr Herman Hu Shao-ming, BBS, JP, Council Chairman, Professor Way Kuo, CityU President, Dr Yeung Kin-man, JP, Chairman of the organising committee for the dinner, and other members of the organising committee into the venue dressed in their costumes. 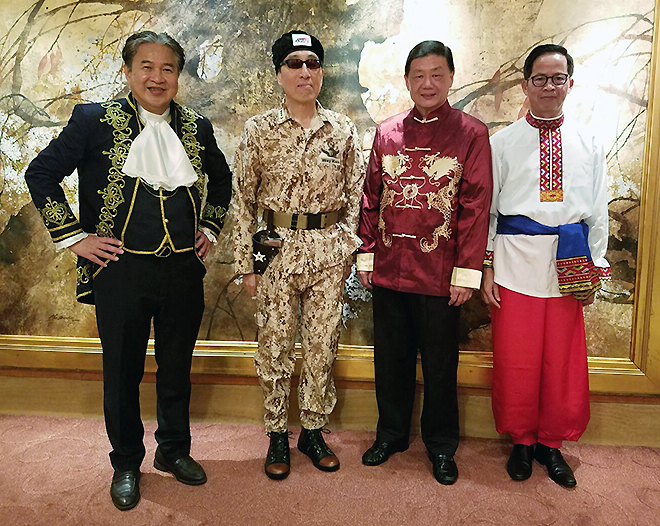 In his welcoming address, Mr Hu said CityU had advanced many of its internationalisation initiatives in recent years, including the one for enabling 65% of undergraduates to join overseas exchange activities between 2015 and 2020.

In 2015/16, more than 1,300 students took part in overseas exchange programmes and over 1,100 students from various parts of the world enrolled at the University. Mr Hu said he hoped the funds raised by the dinner could offer more opportunities for students to go abroad.

Professor Kuo, who performed his military service as an ensign-candidate in the Taiwan Marine Corps, said CityU focused on the development of hardware and software, and he noted that academic performance and ranking were rising steadily. At the same time, the University also emphasised “soulware”, which the recent new media exhibition on Castiglione’s paintings and Hakka kung fu exemplified. He also thanked members of the CityU Foundation and patrons for their support, which had helped to propel the University even further and higher. 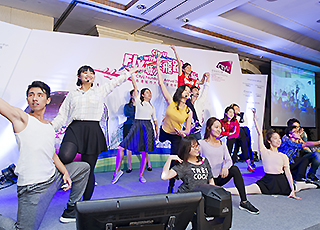 Students perform a well-received scene from the Broadway musical Fame. 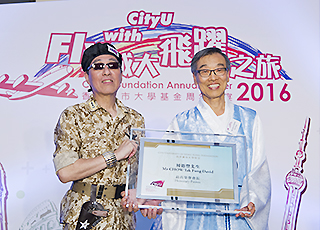 Professor Kuo (left) presents a certificate to Mr Chow, a member of the CityU Foundation’s Board of Governors and a new Honorary Patron of the Foundation.

Dr Yeung thanked all the committee members involved in organising the event for making the dinner so successful. He said CityU was now impressively ranked 7th in Asia, according to the 2016 world university rankings published by Quacquarelli Symonds (QS). He also expressed his hope that the funds raised at the dinner could benefit students from different backgrounds and give them an overseas learning experience. By expanding their international exposure, they could make better contributions to society after graduation, he said.

Professor Kuo presented a certificate to Mr David Chow Tak-fung, a member of the CityU Foundation’s Board of Governors and a new Honorary Patron of the Foundation, for his support and contributions. 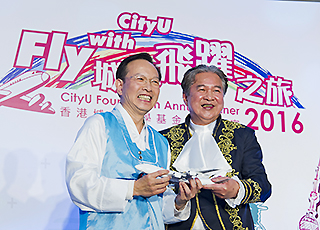 One of the highlights during the dinner was a micro movie Never Too Young produced by students from the School of Creative Media. The movie explained how donations help students pursue their dreams, and took the opportunity to thank the donors on behalf of all CityU students.

Another highlight was the performance of a scene from the Broadway musical Fame, which was part of the 2016 CityU Arts Festival. The students’ outstanding performance was very well received by the audience.

A special feature of the dinner was the two auctions hosted by Mr Nat Chan Pak-cheung, a famous local artist, and representative of Sotheby’s. One of the nine auction items was a painting Refreshing Commencement For All by Mr Wang Shuping. The painting, donated by Mr Hu, went under the hammer for HK$2.5 million. Other auction items included red wine, abalone, calligraphy, and a private banquet with Professor Kuo as the chef.

Before the end of the dinner, Dr Yeung presented a model airplane that signified the annual dinner to Mr Winfred Chan Hon-pun, Chairman of the 2017 annual dinner organising committee and a member of the CityU Foundation’s Board of Governors.

For more event photos, please view at this link.