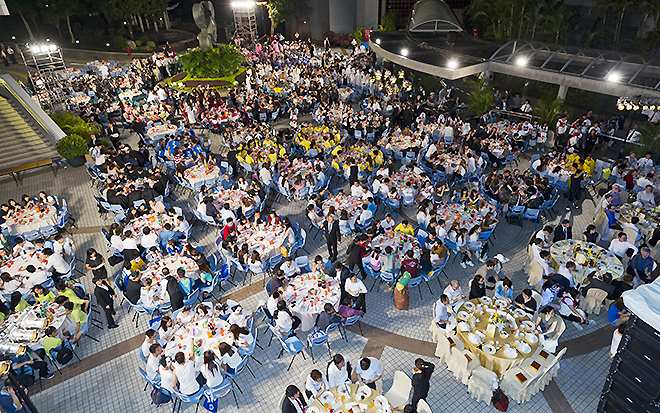 The CityU Banquet tradition continues with around 1,000 participants.
Around 1,000 Council members, faculty, staff, students and alumni filled over 80 tables on campus and enjoyed a delightful banquet themed “Dinner Gathering at Joyous City” on 28 October.
After being suspended for one year, the 20-year-long CityU Banquet resumed its tradition this year thanks to coordination by the Students’ Union at City University of Hong Kong (CityU).
Guests included Mr Herman Hu Shao-ming, Chairman of CityU Council, Professor Way Kuo, CityU President, Mr Clovis Lau Koong-yep, Chairman of the Convocation, Professor Gary Feng Gang, Acting Provost, Dr Tim Wong Chi-tim, Acting Vice-President (Student Affairs) and Dr Ron Kwok Chi-wai, Dean of Students. They were joined by five members of the Banquet Organising Committee to officiate at a simple yet solemn toasting ceremony that kicked- off the banquet.

Students don special costumes for the fashion show.
In his address, Mr Hu congratulated CityU for its excellent performance in the past year. The University not only rose steadily in the world university ranking published by QS (Quacquarelli Symonds), it also launched the first local undergraduate degree programme in veterinary medicine, which marked a milestone in the development of veterinary education in Hong Kong.
In addition, the CityU sports team won the men’s overall championship and claimed the 1st runner-up in the women’s overall championship in the annual competitions organised by University Sports Federation of Hong Kong (USFHK).
Moreover, two CityU students representing Hong Kong won a gold medal in the World University Squash Championship. “Team spirit is the key to success in sports competition as it is for the performance of a university. With outstanding faculty and students who play to their respective strengths, CityU has now become one of the top higher education institutions in the world. I feel very honoured to be the Chairman of CityU Council,” Mr Hu said.
Professor Kuo noted that CityU would not slow down its pace of development, although its academic achievements had been well recognised in the world. He said that following its recent acquisition of a prestigious veterinary clinic, CityU’s School of Veterinary Medicine was planning to acquire a farm. At the same time, the University has not neglected the development of the arts and humanities. Professor Kuo encouraged staff and students to experience the 2nd CityU Arts Festival, which has just commenced its four-week programme.
Mr Lau expressed his appreciation of the students’ effort in preserving the tradition of organising the banquet. He urged students not to forget their alma mater and come back to share their experience with their fellow students after graduation. Lee Chak-hin, Acting President of CityU Students’ Union, said he hoped that the banquet could unite all societies under the Union to care about the community.
A series of programmes were arranged during the banquet, including dance and street music performances by groups of students. In the fashion show, students mocked Pokémon and Super Mario Bros, making all costumes and props on their own in the spirit of social trends.
The banquet reached its climax when, to the delight of his legions of fans in the audience, many of whom took to the stairs and steps to get a better view, popular singer Mr Jason Chan and the band ToNick performed a set of songs.
The lucky draw brought the banquet to a perfect end.

Guests and members of the Banquet Organising Committee propose a toast.