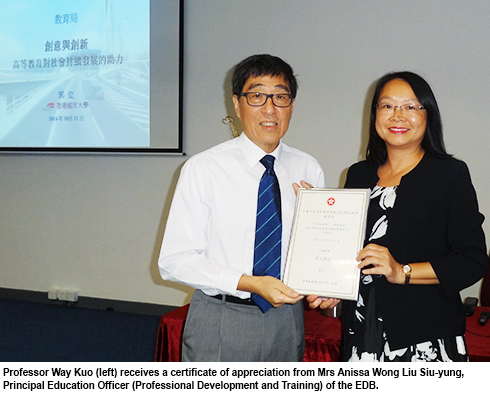 Education is a very complicated issue that appears to be simple, according to Professor Way Kuo, President of City University of Hong Kong (CityU) speaking at the invitation of the Education Bureau (EDB) on 11 October.
The title of the talk was “Creativity and Innovation: Professor Kuo Talks about the Impact of Higher Education on Sustainable Society Development”. In attendance were around 100 EDB administrative staff, school principals from primary and secondary schools in Hong Kong, including some CityU alumni.
“There are no easy solutions, even though we hear people freely voice their personal observations, which need to be substantiated by proof,” he said.
Professor Kuo shared with the audience the story about a debate many years ago between two well-known educators, Mr Fan Yuan-lien, Vice-Minister of Education of the Republic of China at the time, and Mr Tsai Yuan-pei, Minister of Education.
Mr Fan argued that education should start with primary schools. Without good primary schools, there would be no good secondary schools, he argued. And if there were no good secondary schools, how could there be good universities?
Mr Tsai, on the other hand, insisted that universities should be emphasised. If there were no good universities, he reasoned, there would be no good secondary school teachers. Without good secondary schools, where would good primary school teachers come from?
Professor Kuo didn’t judge who was right or wrong, but he did point out that the “whole-person development” education proposed for Hong Kong universities should have started with primary and secondary schools.
Instead of subjecting teenagers and younger children to training in “useful” skills, afraid that they might lose out at the starting point of their education, he said a solid foundation in basic disciplinary knowledge such as language, mathematics and history should be prioritised.
“Universities should concentrate on professional training,” he said. 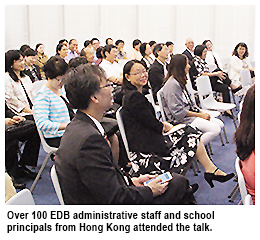 The purpose of education was to show the Way, he said, hoping students can be trained to contribute to society. What was lacking in our higher education system was the disparity between real knowledge and a college degree, noting that Chinese society seemed to overemphasise college degrees, forgetting that actual knowledge and expertise are more important.
“If people with degrees had more knowledge and expertise and contributed more to society than people without degrees, it would be proof of the success of education. Otherwise, our education system would have failed,” he said.
He elaborated his point by citing the example of the Southwest Associated University (SAU) in China during the Second World War. In spite of its poor teaching and living conditions and inadequate research supplies, it produced a large number of distinguished alumni, including Nobel prize winners, outstanding mathematicians, literary scholars and dramatists, among others.
Some say the reason for SAU’s success is that it had a great president and a group of great professors. These were necessary elements, of course, but not sufficient, Professor Kuo argued. What was more important was that SAU enjoyed academic autonomy and freedom, i.e., it was not subject to political interference.
“This is important for universities today as well,” he said, adding that government and education should lead and guide society, and not be led entirely by society.
As far as originality and innovation were concerned, Professor Kuo pointed out, people in Hong Kong did not lack creativity. What’s lacking is badly needed support from the government and society.
An absence of support has meant that innovative initiatives that could have blossomed in Hong Kong didn’t. Professor Kuo cited as examples Professor Charles Kao Kuen’s fibre optics in the early days; the mobile phone glass covers created by Mr Yeung Kin-man, Founder and Chief Executive of Biel Crystal Manufactory; and the drones developed by Mr Frank Wang’s company Da-Jiang Innovations (DJI) Science and Technology Co. Ltd.
Their innovations could have created tremendous wealth for Hong Kong and substantial career opportunities for the Hong Kong people, Professor Kuo said.
According to Professor Kuo, Hong Kongers are hard-working and smart, praiseworthy in many aspects with their meticulous attention to detail, keeping abreast of the times and adaptable to change, and “always the best number two”, so to speak.
But, constrained by numerous rules and regulations, they tend to be risk-averse rather than embracing innovation, and therefore, can hardly be expected to lead the world, according to Professor Kuo.
“Such behaviour is prevalent in higher education as well. Such a mindset is what I refer to as outdated ‘soulware’. Our higher education will never be first-class in the world if we don’t change our mindset in spite of the advanced hardware and software we possess,” said Professor Kuo.
The EDB regularly organises activities featuring society leaders from various circles to deliver talks to EDB staff in an effort to enhance quality. Guests invited include people of the calibre of Mr Shih Wing-ching from the property sector and Mr Jasper Tsang Yok-sing, Former President of the Legislative Council, from the political arena.
Professor Kuo is the first university president to be invited to share his views on education at the EDB.