​Four outstanding scientists at City University of Hong Kong (CityU) have won the Second Class Award in the Natural Science category at the 2015 Higher Education Outstanding Scientific Research Output Awards (Science and Technology) from the Ministry of Education. 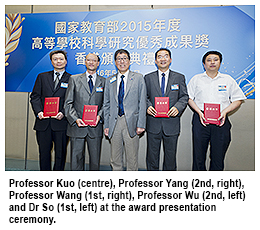 Outperforming other local institutions, CityU secured four winning projects this year, which included one led by Professor Michael Yang Mengsu, Chair Professor and Dean of the Department of Biomedical Sciences.

Specialising in the studies of biochip technology and nanomedicine, Professor Yang won the award with his project titled “Studies on cell communication and biomolecule test platform based on microfluidic chip technology”. Microfluidic chip, the newest focal study of the biochip, allows scientists to test for biological and chemical reactions.

By combining chip integrated technology and nanotechnology, Professor Yang has successfully developed a system that can perform rapid toxin tests and cell analysis with the features of high sensitivity, high specificity and high throughput. It can be widely used for medical diagnosis and environmental tests.

In Professor Wang’s project, combinatorial optimisation is an important area of study in mathematics, and the design of targeted therapy with no side effects is a difficult problem in matrix recognition that requires simultaneous optimisation of two objective functions. Professor Wang’s project has derived a polynomial-time approximation scheme that can simultaneously and randomly approximate two objective functions. It has proved for the first time in theory the existence of a polynomial-time approximation algorithm.

Professor Wu and his team has systematically conducted in-depth study on advanced connection technology for green manufacturing, which involves new materials, new processes and new principles. Some achievements have been established and recognised worldwide. The work has a significant impact on the implementation of the green welding materials for the electronic industry.

Dr So and his research team have devised a series of theories and methods for three important array signal processing problems, namely, direction-of-arrival estimation, source enumeration and target localisation. All the developed algorithms are robust, computationally efficient and accurate. The research findings have yielded 106 publications in prestigious signal processing journals.

The Higher Education Outstanding Scientific Research Output Awards (Science and Technology), which were set up by the Ministry of Education, are presented annually to recognise outstanding achievements in fundamental and applied research of natural science conducted by scientists.