​Hong Kong people recorded the lowest score on a happiness index and the lowest levels of satisfaction in all aspects of quality of life when compared to residents in Japan and South Korea, according to a survey conducted by the College of Liberal Arts and Social Sciences (CLASS) at City University of Hong Kong (CityU).

Professor Dennis Wong Sing-wing, Associate Dean of CLASS at CityU, and his research team conducted a survey titled “Happiness Index: Comparison between Hong Kong, Japan and South Korea” in January 2016. More than 1,100 citizens in Hong Kong, Osaka and Seoul were interviewed. A total of 3,453 questionnaires were collected.

Compared to Osaka and Seoul, Hong Kong had the lowest scores for satisfaction about the quality of life. Among the six aspects, Hong Kong people felt most dissatisfied about housing (score 4.05), followed by politics and society (4.33) and the environment (4.80). Hong Kong’s score for housing was clearly much lower than that of the other two cities (Osaka, 6.45 and Seoul, 6.19).

A similar survey was conducted by CLASS last year for Hong Kong, Japan (Osaka) and Singapore, with Singaporeans having the highest scores in the Happiness Index and levels of satisfaction about quality of life in all areas. To enhance the importance of the project for reference, South Korea was selected this year as it is an East Asian country with a similar quality of life to that of Hong Kong. Compared with last year, Japan’s score in the Happiness Index remained unchanged (7.41). Although its score for leisure and entertainment was the highest among all six areas, it declined slightly against last year.

Hong Kong people’s score in the Happiness Index dropped slightly (0.15) against last year’s results ( Table 2 ), showing local people are still unhappy. The scores for all six areas of quality of life fell, except for public health, which showed some improvement.

In the area of politics and society, there have been many controversial issues, such as the incidents of excessive lead content in drinking water, the universal retirement protection scheme, and the Copyright (Amendment) Bill 2014. All these issues have aggravated the polarisation of Hong Kong society and led to dissatisfaction with the government.

On the environmental front, local people’s health is threatened because air quality in Hong Kong continues to deteriorate due to factors such as climate change and cross-border pollution. That’s why Hong Kong’s scores for quality of life in these three areas were below the passing mark.

Japanese people had the highest score for housing (6.45) and politics and society (5.48) because, Professor Wong said, Japan’s government supports low-income people and property prices are more affordable when compared with income in Japan. Furthermore, Professor Wong believed that it might be because the adverse effects of “Abenomics” had not materialised. In addition, the government led by Shinzo Abe has worked hard to improve the political, societal and economic situation in recent years, which has sustained stability. 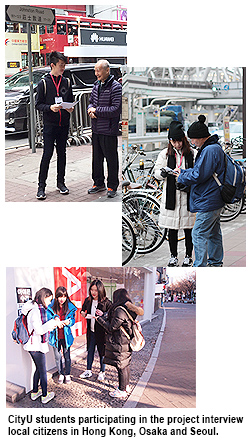 Although Japan had a lower score in entertainment than South Korea did, it should be noted that the score is still as high as 7.78. Professor Wong pointed out that there were an abundance of entertainment facilities with theme parks and shopping streets in Osaka. Therefore, leisure and entertainment is the area that received the highest score for levels of satisfaction about quality of life in Japan.

Among the three cities, South Korea had the highest score in leisure and entertainment, public health, economy and the environment. Professor Wong said there had been a rapid development in the entertainment industry in South Korea. In addition to popular theme parks, South Korea has a lot of traditional cultural activities and unique streets that offer culturally rich options. What’s more, South Korea has significantly improved its public health system by consolidating related health insurance policies.

On the economic front, South Korea has been actively developing its tourism industry by converting districts like Myeong-dong and Hongdae in Seoul into hot shopping spots. Also, due to the effects of the “Korean Wave”, the locations where popular South Korean TV series were filmed have become tourist spots. Furthermore, the successful launch of electronic products in overseas markets has provided momentum for South Korea’s economic development.

However, the outbreak of the Middle East Respiratory Syndrome (MERS) last year significantly affected South Korea’s tourism industry. Therefore, although South Korea had the highest level of satisfaction about the economy among the three cities, its score was only 5.76. On the other hand, in terms of the environment, South Korea residents were quite satisfied because the municipal government has introduced green policies aimed at tackling environmental problems such as sewage treatment and air pollution.

The study found that the happiness index among women in the three places is higher than that among men, on average. The reason might be because, traditionally, men suppress their feelings, often for culture reasons; while women have more channels to express themselves. As men are often the main source of financial support within a household, women tend to experience less work-related stress, and hence they are generally happier. In addition, due to their heightened educational level and social status, women no longer play an inferior role to men. Therefore, women have a much stronger sense of self-esteem and achievement.

The study also found that senior citizens (aged 65 or above) in Hong Kong scored higher on the happiness index than other age groups did, probably because they face less work and family stress, and many of them have retired, which is why they might be happier. On the other hand, young people (aged below 24) in Japan and South Korea were happier than the other age groups because they are mostly at school, with their parents taking care of them, and they have access to help from their families or teachers when they encounter difficulties. Thus they have less economic and work-related stress.

For the correlation between educational level and happiness, interviewees with primary education in all three places were the happiest people. As educated persons might have a higher expectation towards life and society, citizens with higher education level in the three places were relatively less happy about their lives.