China offers internet and technology entrepreneurs a wealth of opportunities according to Dr Lee Kai-fu, Chairman and CEO of Innovations Works, speaking at a City University Distinguished Lecture on 3 December. 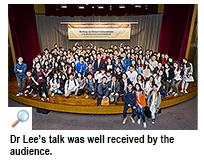 Dr Lee was discussing the unique environment and opportunities in China, the rapidly evolving early-stage eco-system, and his company’s strategy to identify growth areas, assist entrepreneurs, help build great companies, and deliver excellent investment returns.
“China has the largest monetisable mobile market in the world,” said Dr Lee, a member of the International Advisory Board for CityU’s new Institute for Advanced Study and a holder of an Honorary Doctorate in Business Administration from CityU.

The internet was changing everything, everywhere, he said, and China was ripe for development for several reasons: traditional companies would struggle to adjust to the new market environment; start-ups had every chance of overcoming brands on the mainland; and China had a strong foundation and culture of using mobile phones for services and transactions.
“In addition, there are 600 million smart phones in China and several cities with populations that run into the millions,” he said.
Growth has been spurred by the development of e-payment processes, facilitating O to O (online to offline) business and service for the burgeoning middle-class on the mainland. 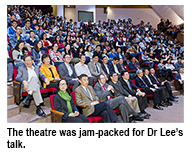 “China has possibly the most on-demand economy in the world. You can stay home and order just about everything you need from your phone!” he said.
In his talk, Dr Lee outlined how his company Innovation Works spots potential among the plethora of start-ups, identifies what makes them attractive and looks at how they might be turned into profitable enterprises.
Innovation Works is a leading early-stage investment company targeting the next wave of Chinese high-tech companies and to mentor the next-generation of Chinese entrepreneurs.
Prior to starting Innovation Works, Dr Lee was the Vice-President of Google and the President of Google China. Previously, he held executive positions at Microsoft, SGI and Apple.