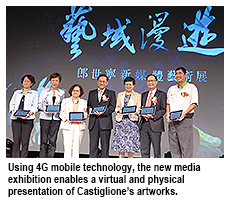 Three new media art exhibits developed at City University of Hong Kong (CityU) will be on display at the “Giuseppe Castiglione – Lang Shining New Media Art Exhibition” jointly organised by the National Palace Museum (NPM) in Taipei and CityU. The opening ceremony of the exhibition was held in the Wenhuitang Auditorium of NPM on 15 October.

Part of the celebratory activities for the 90th anniversary of NPM, the new media art exhibition re-creates exquisite works by Giuseppe Castiglione (1688-1766) using digital technology to pay special tribute to the missionary who had such a profound impact on Chinese painting.

Using 4G mobile technology, the new media exhibition enables a virtual and physical presentation of Castiglione’s artworks. With smart actions or devices, viewers can travel back in time to appreciate Castiglione’s aesthetic style.

The three creative exhibits specially produced by Chair Professor Jeffrey Shaw and other artists at CityU’s School of Creative Media are: “Explore the Flora and Fauna of Castiglione”, “Let’s Paint One Hundred Horses” and “Castiglione’s Virtual Flowers”.

This is the second collaboration in new media art exhibitions between CityU and NPM. The first was the “Rebuilding the Tong-an Ships New Media Art Exhibition” held at CityU from August to October 2015. 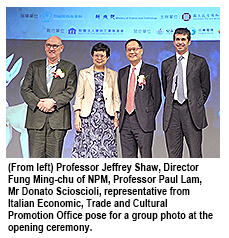 Professor Paul Lam Kwan-sing, CityU’s Chief-of-Staff, said at the opening ceremony that the University was glad to work again with NPM to promote art and culture to the public using CityU’s strengths in creative media.

“We hope that re-presenting Castiglione’s masterpieces using creative technology can help people know more about the Italian painter from three centuries ago. Also, we expect further collaboration between CityU and the museum in the future to boost more understanding of Chinese cultural treasures among the public,” he added.

Castiglione, an eminent court painter, architect and art designer, spent 51 years in the Qing Empire’s palace and produced many excellent works during the reigns of Emperors Kangxi, Yongzheng and Qianlong.

Blending European techniques with China’s traditional artistic methods, his works have opened up a new perspective on Chinese painting and are greatly admired in China.

Brief notes about the three exhibits created by CityU’s School of Creative Media:

“Let’s Paint One Hundred Horses”
Viewers use a tablet to re-colour horses that can be digitally extracted from Castiglione’s painting “One Hundred Horses”. Using this ultra-high definition video installation, viewers are able to insert their “re-coloured” horses back into Castiglione’s painting. In this way, visitors can continuously add their own inspirations to this particular masterpiece.

“Castiglione’s Virtual Flowers”
Viewers use a digital tablet to discover the virtual vases and their flowers in Castiglione masterpieces “Gathering of Auspicious Signs” and “Vase of Flowers”, which appear like 3D holograms on top of two pedestals.