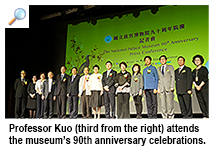 Three new media art exhibits developed at City University of Hong Kong (CityU) were on display at the 90th anniversary ceremony for the National Palace Museum (NPM) in Taipei.

CityU’s School of Creative Media (SCM) specially developed three art exhibits based on the work of Giuseppe Castiglione for the birthday celebrations. 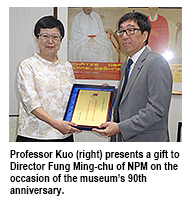 The three SCM exhibits are titled “Explore the Flora and Fauna of Castiglione”, “Let’s Paint One Hundred Horses” and “Castiglione’s Virtual Flowers”. They were exhibited at an exhibition titled “Giuseppe Castiglione – Lang Shining New Media Art Exhibition”, which is part of the special exhibition on Castiglione. 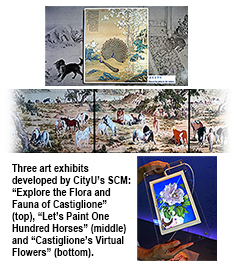 “It is highly admirable to see the National Palace Museum starting to use digital technology in recent years to present its collection of exquisite works,” said Professor Way Kuo, CityU President, who attended the ceremony and visited the exhibition with Professor Paul Lam Kwan-sing, CityU Chief-of-Staff.

“The collaboration with the Museum not only exemplifies CityU’s strengths in creative media art but also helps the University promote the development of Chinese art and culture,” he added.

This year marks the tricentennial of Castiglione’s arrival in China. Castiglione, an eminent painter, architect and art designer, spent 51 years in the Qing Empire’s palace.

He produced many excellent works during the reigns of Emperors Kangxi, Yongzheng and Qianlong.

This is the second collaboration on new media art exhibitions between CityU and NPM. The first was the “Rebuilding the Tong-an Ships New Media Art Exhibition” held at CityU from August to October 2015.

In addition, NPM held a cocktail reception for the opening of “90 Years of Collecting: A Selection of Fine Works of Art Acquired by and Donated to the National Palace Museum”.