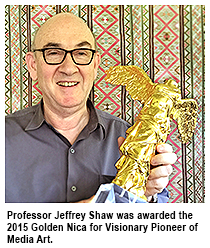 Professor Jeffrey Shaw of the School of Creative Media has received the 2015 Golden Nica for Visionary Pioneer of Media Art from the Prix Ars Electronica.

It is considered the world’s most prestigious award for digital art. His critically acclaimed art works have been exhibited at major museums and festivals throughout the world where he has pioneered and set benchmarks for the creative use of interactive digital media technologies in the fields of expanded cinema, virtual and augmented reality, immersive visualisation environments, navigable cinematic systems and interactive narrative.

“This Golden Nica is a very gratifying reward for over 50 years of enthusiastic dedication to pushing the boundaries of media art,” said Professor Shaw who collected his award in Austria in early September.

The Golden Nica is recognition of the benchmark contributions to the field, bringing Professor Shaw’s work to the attention of media art students worldwide.

“I hope my work can inspire students to also break new ground,” he said. 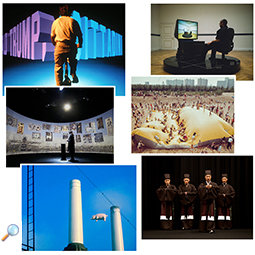 While the award is recognition of the work that Professor Shaw has created throughout his career, it specifically focuses on his achievements as a visionary pioneer in media art and his success in pursuing groundbreaking and paradigm shifting research.

His lifetime’s work was honoured just last year when he was recognised for outstanding contributions to immersive and interactive technologies by the Society of Art and Technology in Canada; and when he was awarded a retrospective of his career’s work at Shanghai’s Chronus Art Center, which focuses on the experiment, production, research, exhibition and education of new media art.

“I am also leading the University Grants Committee-funded CLIP research project on ‘immersive teaching and learning’,” he added.

In addition, on the occasion of this Golden Nica award, Professor Shaw published documentation of 130 of his works from 1966 to 2015. A “compendium” of his work offers viewers a taste of his pioneering projects dating back to the mid-60s.