A novel gene vector developed by Jin Weihong, a PhD student from the Department of Physics and Materials Science at City University of Hong Kong (CityU), enhances the efficiency of delivering gene therapy and chemotherapy drugs into cancer cells, bringing new hope for cancer patients. 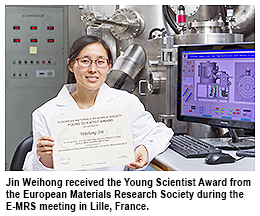 The results were evident in clinical trials on mice. The tumours in mice treated with the vector were significantly smaller and the tumour growth was dramatically suppressed during the 17 days of observation, according to Jin’s research, which is being conducted in collaboration with Zhejiang University.

Her discovery was introduced in a paper titled “Improvement of biomaterials properties using plasma-based technology”, which brought her the Young Scientist Award and cash prize from the European Materials Research Society (E-MRS) during the E-MRS meeting in Lille, France, in May 2015.

Gene therapy is a promising strategy for the treatment of cancer and various inherited diseases. Its major objective is to transfer naked therapeutic genes, such as DNA, small interfering RNA (siRNA), messenger RNA (mRNA), and microRNA (miRNA) via a vector to the targeted tissues, compensating for abnormal genes to make a beneficial protein.

However, the naked therapeutic genes are rapidly degraded by nucleases because living organisms are generally well protected against invasion of foreign materials.

Vectors such as cationic polymers are attractive due to their low immunogenicity, large-scale production, large carrying capacity, and possible modifications. However, their delivery efficiency is typically low. 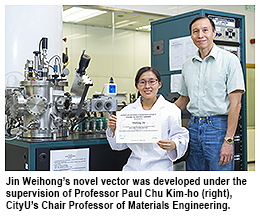 Chemotherapeutic drugs and siRNA were delivered to the tumour-bearing mice via three-layered multifunctional nanocarriers. The tumour growth rate decreased during the 17 days of observation and there was almost no obvious tumour growth thereafter, indicating significantly effective anti-tumour therapy in a mouse tumour model.

“I would like to thank CityU for creating an environment conducive to research and providing first-class facilities, which have made my discovery possible. I would also like to express my gratitude to Professor Chu for his guidance and advice over the years,” Jin said.

The strategy proposed in this study sheds new light on the roles of plasma technology and metal elements in the development of a delivery system for the enhancement of cancer therapy.