The Council Chairman of City University of Hong Kong (CityU) discussed the state of the sports industry at the “City Seminar: Sports・Industry・Society” organised by the College of Business on 5 June.

In the seminar, Mr Hu reviewed recent trend in the sports industry in western countries. He cited examples of how famous sports brands have allocated large amount of money to sponsor renowned athletes, clubs and international events. For instance, in 2013 alone, the gross value of the world-wide industry reached over US$800 billion. The sports industry alone accounted for 2.65% of the GDP in the US, and 2.56% of the GDP for the European Union. 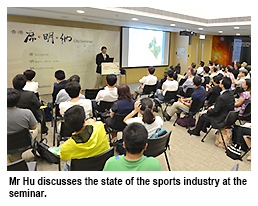 In contrast, sports activities are still regarded as leisure and entertainment in China.

To reverse the trend, the State Council released a special report in October 2014 that encouraged the development of the industry. The report recommended increasing spending on sports-related activities, with a target for its gross value to reach over RMB5 trillion by 2025.

“The sports industry on the mainland has just started to develop. However, with the rapid expansion of the middle-class and the increased awareness of health, the industry should have a very bright future,” Mr Hu said. He suggested that the industry worked closely with the General Administration of Sport of China to set up more clubs and nurture more athletic talent.

The industry can also promote sports events through collaboration with the tourism industry. Furthermore, it should bring in more overseas experts to train management professionals for sports in mainland China, he added.

Mr Hu pointed out that promoting sports could encourage athletes to win awards for the country. Also, with an emphasis on teamwork and respect for coaches, sports can strengthen social cohesion and a sense of belonging in the long run. In addition, public health expenses and social issues can be reduced when more people improve their health by taking part in sports activities. 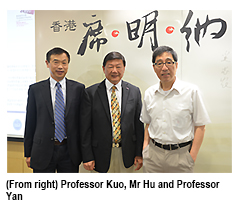 He praised the CityU sports teams for winning an 8th Grand Slam in the men’s and women’s overall championship in the annual sports competition organised by The University Sports Federation of Hong Kong, China, (USFHK) last year.

In his welcoming remark, Professor Yan Houmin, Dean of the College of Business, said staff members and students of the College liked to take part in sports events.

For example, eight students from the Master of Business Administration (Executive) programme joined the 10th Xuanzang Road Business School Gobi Challenge in May. They trekked 112km in four days across uninhabited sections of the Gobi Desert.

Staff and students of the College have also joined CityU’s rowing team, and they are currently working hard to prepare for the upcoming dragon boat competition.