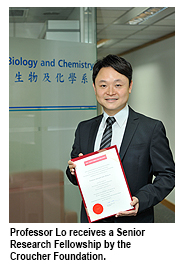 Professor Kenneth Lo Kam-wing of the Department of Biology and Chemistry at City University of Hong Kong (CityU) has been awarded a Senior Research Fellowship by the Croucher Foundation for his pioneering research in inorganic chemistry.
His major research area is the utilisation of luminescent transition metal complexes as biomolecular probes and bioimaging reagents. His findings have provided a new perspective on the development of biological reagents for diagnostic and therapeutic applications.
The potential applications of the research outcomes include photodynamic therapy as a treatment for cancer, as well as detection of certain molecules and ions associated with cancer, Alzheimer’s disease and Parkinson’s disease.
“Most fluorescent biological probes and bioimaging reagents developed thus far are organic dyes. It is commonly believed that transition metal complexes are highly toxic and thus not suitable for biological applications, especially where living systems are concerned,” Professor Lo said. “Our research team has managed to control the toxic levels of these compounds. The results also show that luminescent transition metal complexes are attractive candidates to probe biomolecules and image live cells and animals, because they show longer-lived emission, higher photostability and minimal self-quenching.” 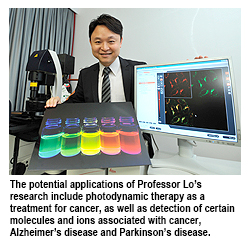 While the luminescence properties of transition metal complexes were discovered several decades ago, the possibility of using them in biomolecular recognition and bioimaging applications is a relatively new area of research.
Professor Lo has published more than 75 papers about the applications of luminescent transition metal complexes as biomolecular probes and imaging reagents. He started looking into the feasibility of using his complexes as bioimaging reagents in 2007, triggered by conversations with his colleagues.
“I have been working at the Department of Biology and Chemistry at CityU since 1999, so naturally a lot of interactions and collaborations exist between the two disciplines,” Professor Lo said. “One day a couple of colleagues in Biology talked about buying fluorescent organic dyes and we made a casual remark about the possibility of using our own luminescent metal complexes as bioimaging reagents. Since then we have been doing much home cooking instead of buying takeaway!”
The design of luminescent transition metal complexes has been one of Professor Lo’s research foci since his PhD work. 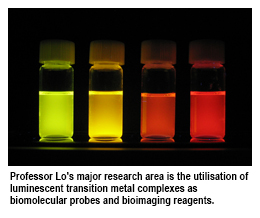 This is the second time that Professor Lo has received an award from the Croucher Foundation. Between 1997 and 1999, he worked as a Croucher Foundation Postdoctoral Research Fellow at the University of Oxford where he conducted research on the genetic engineering and electrochemistry of the redox-active proteins cytochrome P450cam and putidaredoxin. “Working on very different disciplines in my PhD and postdoctoral training has definitely enriched my research experience,” he said.
“I have known many respectable scholars who have received Croucher Senior Research Fellowships; one of them was my supervisor and others were my professors at The University of Hong Kong, where I obtained my undergraduate and postgraduate degrees. It is a great honour to receive the same award,” he said.
The fellowship will allow Professor Lo to undertake full-time research for a period of one year. He will make use of the time to conduct his current research, explore new topics, and network and collaborate with both local and overseas researchers.
An avid music and film lover, Professor Lo attributed his achievements to his interest in research and more importantly, his diligent group members. “While I do all the dreaming, my students and research assistants are the ones who realise my dreams, for which I am always grateful,” he said.
In view of the falling interest among Hong Kong students in taking pure science subjects as majors, Professor Lo hopes young people who love science will follow their interests instead of only considering financial returns.
“Hong Kong is undoubtedly one of the leading financial centres in the world. However, there is plenty of evidence that scientific research is internationally recognised thanks to the talent and devotion of local researchers,” Professor Lo added. “With continual support from the Government and the private sector, I am sure Hong Kong will further excel in terms of scientific achievements.”
The Croucher Foundation was set up in 1979 by Mr Noel Croucher, one of the founders of the Hong Kong Stock Exchange. The Croucher Senior Research Fellowships provide opportunities for scientists to be relieved of all teaching and administrative duties for one year to carry out full-time research.
​
​