150409-3_luncheon_L.jpg As one of the new employment enhancement initiatives, City University of Hong Kong (CityU) hosted its first Employers’ Luncheon on 9 April to strengthen connections with global and local businesses and showcase exceptional student achievements to prospective employers. 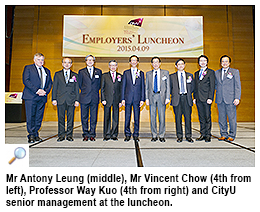 In his welcoming remarks at the luncheon, Professor Way Kuo, University President, stressed the importance of forming strong connections between higher education and the business community.
“CityU is committed to building closer ties and cultivating more collaborative opportunities with employers in order to enhance the competitiveness of our students, and to nurturing a young, vivacious and highly-employable work force that will make our city a better place to live,” he said.
A total of 300 senior management representatives from a wide spectrum of industries and sectors attended the event, which featured a student project exhibition and keynote speech by Mr Antony Leung Kam-chung, Chief Executive Officer of the Nan Fung Group.
At the exhibition were close to 70 display panels and exhibits portraying the learning experience and achievements of CityU students. The exhibition served as a platform to present ideas and projects, demonstrate ability and gain market information. 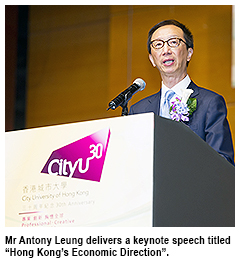 In a speech that addressed the socially vital issue of economic development, Mr Leung spoke on “Hong Kong’s Economic Direction”.
Improving Hong Kong’s competitiveness should be based on two aspects, according to Mr Leung. “The first aspect is to serve China’s economic globalisation and seize the commanding heights. The second is to refine and augment Hong Kong’s growth and development strategy so we can truly become an international centre with far-reaching global impact,” he said.
He added that the defining competitive edge was the talent Hong Kong can nurture, attract and retain, sharing his insights on what attributes students should attain to prepare themselves for the workplace.
“Recently I have been working with a number of friends who are in the education sphere to re-study Hong Kong’s education again,” he said. “We would like our students to be able to think and learn throughout his or her life, to improve their creativity, and more importantly of all, to strengthen soft skills because nowadays in order to be successful you need soft skills, such as the ability to take winning and losing much better.”
Mr Vincent Chow Wing-shing, Deputy Chairman of the CityU Council, thanked Mr Leung for sharing his insights and encouragement with CityU students. He also thanked the students for their dedication to demonstrating their achievements to the guests. 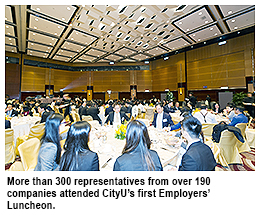 In an important phase of development in 2014, CityU has established the School of Veterinary Medicine in collaboration with the College of Veterinary Medicine of Cornell University to promote public health, animal welfare, and world-class biomedical sciences research and teaching in Asia. It is also offering joint-degree programmes with prestigious universities across the globe, such as Columbia University in the US and National Taiwan University in Taiwan to foster inter-cultural understanding in an increasingly globalised world.
According to a survey involving international businesses, CityU students are well placed in the job market and are sought after by companies globally. In the Global Employability University Survey and Ranking, an annual survey conducted by the French consulting group Emerging and the German research institute Trendence, CityU is among the top 150 universities in terms of producing the most employable graduates, and is one of the four universities in Hong Kong listed in this international ranking in 2014.
The employers in attendance were senior management representing a variety of multinational corporations based in Hong Kong and abroad. Among those attended were the “Big Four” accounting firms, HSBC, Hang Seng Bank, MTR Corporation, The Hong Kong and China Gas Company Limited, Cathay Pacific Airways, Hong Kong Disneyland, Nan Fung Group, Sun Hung Kai Properties, Hong Kong Electric, New World Development Company Limited, Gammon Construction Limited and Rider Levett Bucknall Limited.

Before the luncheon, three CityU students shared with the media how they have equipped themselves for the job market. Pluto Mok Tsz-nok, a student of the School of Creative Media, discussed how his surface designs for cars have been adopted by international racing teams; Jennifer Tang Jung-wah, a student from the Department of Information Systems, shared how she formulated an award-winning innovative business proposal with her teammates for the Association of Chartered Certified Accountants Business Competition; and David Wong Chung-cheong, a student from the Department of Electronic Engineering, shared how he has developed an Android application to control a Nao robot which can perform a series of tasks.
Mr Vincent Chow Wing-shing, Professor Arthur Ellis, CityU Provost, Professor Lu Jian, Vice-President (Research and Technology), Professor Horace Ip Ho-shing, Vice-President (Student Affairs), Professor Matthew Lee Kwok-on, Vice-President (Development and External Relations), Mr Sunny Lee Wai-kwong, Vice-President (Administration), and Professor Paul Lam Kwan-sing, Chief-of-Staff, and about 200 academics and students from different departments, schools and colleges also attended the event, which was hosted and organised by an Organising Committee led by the Vice-President (Student Affairs) and composed of staff from the Career and Leadership Centre of Student Development Service.