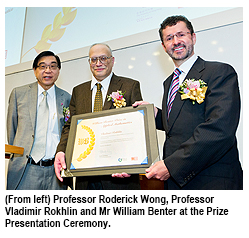 A master in algorithm who has advanced the frontiers of computational mathematics and engineering has been awarded the William Benter Prize in Applied Mathematics 2014 by City University of Hong Kong (CityU).
Professor Vladimir Rokhlin, Professor of Mathematics and the Arthur K. Watson Professor of Computer Science at Yale University, has earned world-wide acclaim for his tremendous contributions in numerical analysis and applied mathematics, in particular in his invention of the Fast Multipole Method (FMM) together with Dr Leslie Greengard, Silver Professor of Mathematics and Computer Science at New York University, which has revolutionised the way engineers and scientists solve tough problems.

The William Benter Prize in Applied Mathematics, a biennial award that carries a cash prize of US$100,000, was set up by the Liu Bie Ju Centre for Mathematical Sciences (LBJ Centre) at CityU in 2010, to recognise outstanding mathematical contributions that have a direct and fundamental impact on scientific, business, finance and engineering applications.
Professor Roderick Wong Sue-cheun, Vice-President (Development and External Relations) and Director of the LBJ Centre, is gratified that the William Benter Prize is getting more and more recognised internationally. “It is extremely difficult in deciding the winner this year,” Professor Wong said. “Just an indication of the keen competition, nearly all shortlisted candidates are members of two academies: the US National Academy of Sciences and the National Academy of Engineering.”
The Selection Committee unanimously chose Professor Rokhlin as the winner of the William Benter Prize this year. The award was presented to him by the donor of the Prize, Mr William Benter, at the opening ceremony of the International Conference on Applied Mathematics 2014 (ICAM 2014), which was co-organised by Department of Mathematics and LBJ Centre in December.
FMM introduces the concept of analysis-based fast algorithms that combine classical analysis with techniques from computer science in numerical calculations. It enables scientists and engineers to rapidly solve complex equations involving millions or even billions of unknowns with unprecedented accuracy.

Since its inception in the 1980s, FMM has been applied extensively in a wide spectrum of fields. It is a highly regarded computational tool in electromagnetics, and microwave and radio frequency applications. It has had a significant impact on chip design, antenna characterisation, and printed circuit boards.
In addition, it has been used in astronomy for simulating the evolution of galaxies and other cosmological structures, in computer-aided drug design, which involves calculations in quantum chemistry, and in the modeling of computers and cell phones to make them more efficient.
The significance of FMM has led the American Institute of Physics and the Institute of Electrical and Electronic Engineers (IEEE) Computer Society to name it as one of the top 10 algorithms created in the 20th century.
A Member of the US National Academy of Sciences and the US National Academy of Engineering, Professor Rokhlin has received many awards and honours for his achievements and contributions over the years. He is the recipient of the 2001 Leroy P. Steel Prize for a Seminal Contribution to Research, the 2001 Rice University Distinguished Alumnus Award, and the 2011 Maxwell Prize from the International Council for Industrial and Applied Mathematics. He was also named an IEEE Honorary Member in 2006 and a Fellow of the Society for Industrial and Applied Mathematics in 2009.
Professor Rokhlin said he was grateful to have received the William Benter Prize. “When I think about mathematics, most of my thinking is very technical: How rapidly does an expansion converge? What is the spectrum of an operator? And somehow such mundane observations add up over time, and eventually evolve into something that is appreciated by my colleagues. Amazing!” he said.
Following the prize presentation ceremony, Professor Rokhlin delivered a lecture titled “Requiem for Moore's Law” which kicked off the five-day conference held from 1 to 5 December 2014.