Celebratory events had showcased CityU’s development and accomplishments over the whole year, he said. Highlights included the 30th Anniversary Kick-off Ceremony at the beginning of the year, the 30th Anniversary Banquet in November, the Distinguished Alumni Award Presentation Ceremony, the Cultural Festival, the exhibition on scientific and art works for Antarctica expedition, local and international marathon races and a sustainability summit.
“The biennial CityU Homecoming Gala strengthens bonds between CityU members, and this year it marked a perfect ending to the celebratory activities for our 30th anniversary,” Mr Hu said. He said he hoped CityU would continue to scale new heights through its dedicated efforts over the next 30 or 50 years.
P

rofessor Way Kuo, CityU President, said the University had developed many outstanding professionals and leaders in various sectors over the years, and their outstanding achievements had made significant contributions to the advancement of society, university and various industries.
CityU alumni actively participated, too, Professor Kuo said, offering constructive comments and donating generously to help set internship awards and student exchange scholarships which make a difference to the development of students.
Expressing his gratitude to alumni for their support to the University, Professor Kuo pointed out that “CityU Homecoming Gala 2014” demonstrated the versatility, diversity, harmony and caring spirit of the CityU community. 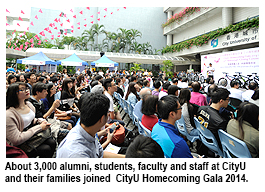 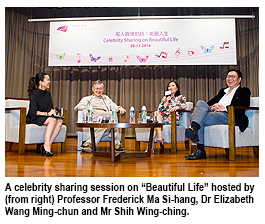