From Marie Curie to the Higgs Boson

​
Theoretical physics is beset with problems and crises. Sometimes you have to settle for answers that are not wholly satisfactory, according to the speaker at the latest talk in the ever-popular France–Hong Kong Distinguished Lecture Series.

With reference to complex particle physics as an example, Professor Edouard Brézin said that while string theory offered some insight into quantum mechanics, there was no evidence that it was related to nature. 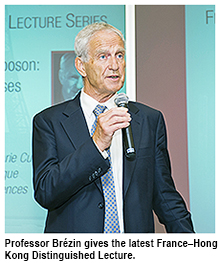 “Imagine a house with many doors and they are all locked except one,” said Professor Brézin in his talk titled “From Marie Curie to the Higgs Boson: A Century of Conceptual Crises” on 19 November at City University of Hong Kong (CityU).
“You have to take that door to exit because you don’t really have any other choices. Well, that’s a bit like strong theory. It’s really the only door we have right now that’s open,” he said.
Professor Emeritus, Université Pierre et Marie Curie; Honorary Professor, École Polytechnique; Member of the French Academy of Sciences; and winner of the Dirac Medal 2011, Professor Brézin guided the audience through the intricacies of high-level theoretical physics, pointing out that there had been many crises over the last 100 years: just as one answer to a problem glides into place, another problem surfaces. 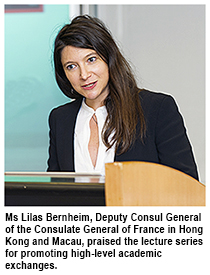 For example, 4 July 2012 was a historic day. It was the day the presence of the Higgs boson was detected for the first time, apparently confirming theories first presented forty years ago. But, why was this so significant? Was it the God particle as some commentators espoused? What answers does the boson supply?
Professor Brézin then took us back to the time of Pierre and Marie Curie and their pioneering work on radioactivity and explained how it led into conceptual questions about energy and matter. Their discoveries—and those of others, such as Ernest Rutherford, who, among many other innovations, outlined the structure of the atom—led to theorising about the nucleus of the atom, half-life decay, isotropes, and the neutron and the neutrino—the last one first hypothesised by Wolfgang Pauli, who said of it: “I have postulated a particle that cannot be detected”.

However, as Professor Brézin said, it was vital that scientists pursued each insight into discoveries by physicists since the applications of their ideas can have a huge impact on areas as treating cancer, for example.
So, while it is certainly not the end of the road, there are many doors that remained closed, which means scientists often have to take the courage and open what is available to them.