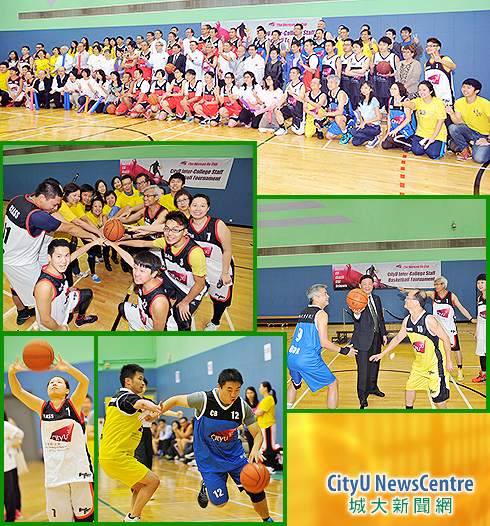 Mr Herman Hu Shao-ming, Council Chairman, kicked off the first Herman Hu Cup: CityU Inter-College Staff Basketball Tournament at the Winling Practice Gymnasium of City University of Hong Kong (CityU) on 4 November.
The tournament, which has been sponsored by Mr Hu, celebrates CityU’s 30th anniversary, strengthens team spirit and staff networking, and promotes physical and mental wellbeing.
Five teams will compete for the championship between 7 and 29 November. They come from the College of Business, College of Liberal Arts and Social Sciences, College of Science and Engineering, School of Creative Media, School of Energy and Environment, School of Law, and School of Veterinary Medicine as well as Administrative units.
“The tournament can promote harmony and coherence among all staff at CityU. I am sure the players will make more friends on the basketball court. This year we have five teams. I hope we will have more in the years to come,” said Mr Hu at the opening ceremony.
Cheered on by their colleagues, three male and three female staff members from each team participated in a shooting hoops competition at the opening ceremony.
The final competition and an awards presentation ceremony will be held on 29 November.