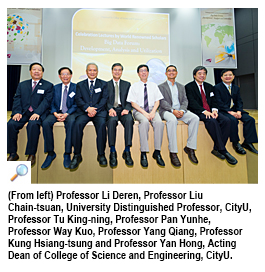 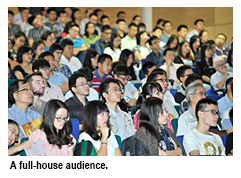 “CityU is rapidly developing know-how in various areas related to big data, especially in the area of public health,” said Professor Kuo in his opening remarks. “Our research into public health includes such areas as plasma ion implantation in the biomedical field.”
“We are developing expertise in genomics, bioinformatics, and omics science in general. Genomics will have an enormously powerful predictive power for human health in the future,” he added.
CityU’s researchers are also exploring the development of new analytical methods for quality control of pharmaceutical companies, drug screening and environmental toxicity testing, according to Professor Kuo. “All these areas need knowledge of and skills in big data,” he said.
In his presentation, Professor Kuo used the examples of the safety of nuclear energy and the effectiveness of teaching to illustrate the data points needed for drawing inference when making decision. 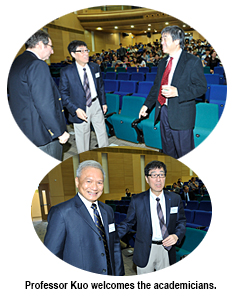 Professor Pan said big data would become the “power” behind economic development in the 21st century, just like petroleum was in the 20th century.
Professor Kung Hsiang-tsung elaborated his views regarding the use of Internet of Things, getting massive data for data analytics, and detecting contextual information to enhance big data analytics.
Professor Li, Professor Yang and Professor Tu discussed the implications of big data for the smart city concept, user-modelling in social media, and statistical analysis of reliability data in very-large-scale-integration technology, respectively.