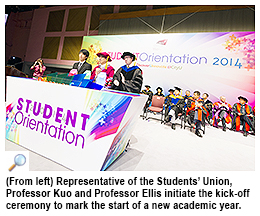 City University of Hong Kong (CityU) extended a warm welcome last week to new students at different orientation ceremonies.
New undergraduate students were greeted at the Student Orientation Welcoming Ceremony from 26 to 27 August. The ceremony began with a video clip showcasing CityU’s development and achievements in the past 30 years and campus life and student activities.
Professor Way Kuo, University President, welcomed the new students to the big CityU family with an introduction to the University, highlighting the international backgrounds of the students and teaching staff and CityU’s openness to different opinions and ideas. 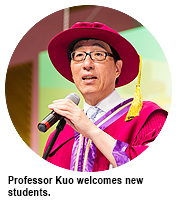 He encouraged students to be curious about the world around them and conduct research that improves people’s lives. He also stressed team work, and urged students to make more friends and work closely with their classmates.
“We hope you will contribute back to society. You are being supported by society and whatever you do today will leave a fingerprint on your future career,” said Professor Kuo.
At the ceremony, Ting Ka-ki, Acting External Vice-President of the Students’ Union, led the new students in a pledge to be the best students and embark on a journey of discovery and innovation.

Professor Arthur Ellis, Provost, gave a brief introduction to the first-year students about CityU’s characteristics, asking them to present themselves well, be confident and become more creative.
In addition, an orientation for around 1000 students on taught postgraduate programmes was organised on 30 August.
Professor Lu Jian, Vice-President (Research & Technology) and Dean of Graduate Studies, gave a welcoming speech, emphasising CityU’s remarkable rise in university rankings in the world and in Asia. He also congratulated all new postgraduate students on joining CityU’s big family.
A welcoming orientation for research degree students will be held on 17 September.