​
The world’s most super-dry surface has been developed by a team of researchers at City University of Hong Kong (CityU). 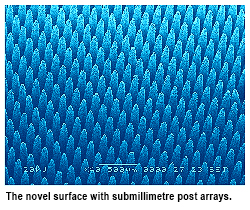 This superhydrophobic surface can be used for fabricating anti-icing materials, and also for any self-cleaning, antibacterial, and anti-corrosion applications.
The research team is led by Dr Wang Zuankai, Associate Professor in the Department of Mechanical and Biomedical Engineering (MBE) and Director of the Bio-Inspired Engineering Laboratory at CityU.
The team found that a superhydrophobic surface patterned with lattices of submillimetre-scale posts decorated with nanotextures can shed away water much faster than any engineered materials.
The research paper, titled “Pancake bouncing on superhydrophobic surfaces”, was published recently in Nature Physics, a prestigious journal published by the Nature Publishing Group.
It was generally believed that a drop of water impacting on solid surfaces would always be separated into two phases: spreading and retracting. In the spreading phase, the drop spreads into a pancake shape. In the retraction phase, the drop minimises its surface energy and pulls back inwards. 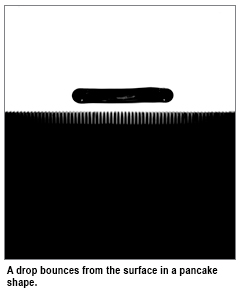 On superhydrophobic surfaces, the drop can jump off at the end of the retraction stage due to the presence of an air cushion within the rough surface underneath the droplet. However, there exists a theoretical contact time-limit when it comes to how long it takes for an impinging droplet to bounce off the surface.
“For the first time, we have shown that we can shape the drop to bounce from the surface in a pancake shape directly at the end of the spreading stage without going through the receding process, a behaviour that we called ‘pancake bouncing’. As a result, the classical contact time-limit is broken and the droplet impinging on the surface can be shed away four-times faster,” Dr Wang said.
The magic lies in the surface texture. To prevent the penetration of water into the surface, conventional wisdom has focused on the use of micro/nanoscale posts with small inter-post spacings. Research has shown that the smaller the inter-post spacings, the higher impacting velocity that the surface can withstand. 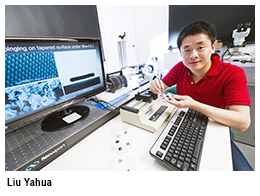 “Distinct from others’ work, we intentionally designed the tapered surface with submillimetre post arrays as well as a wide inter-post spacing that allows for an adequate liquid penetration without the loss of the air cushion. Thus, the stored capillary energy can be efficiently transformed back into kinetic energy for fast droplet detachment. This is really counter-intuitive,” said Liu Yahua, a PhD student in MBE supervised by Dr Wang and the lead author of the research paper.
Moreover, this novel surface structure naturally avoids the mechanical instability issue encountered in the conventional superhydrophobic surfaces.
The novel surface offers lots of applications, for example, preventing metal surfaces, such as aircraft wings and engines from icing over.
Ice buildup on airplane wings and engines can cause accidents. In 2009, Air France Flight 447 crashed into the Atlantic possibly as a result of icing problems. Icephobic materials are useful in the fabrication of air-conditioning systems, too.
“The buildup of frost or ice layers on evaporator surfaces in air-conditioning systems causes large thermal resistance as well as a higher pressure drop across the heat exchanger, degrading the overall performances of the air-conditioning systems and leading to substantial undesired energy consumption,” Liu Yahua said.
The team’s work is also featured in the News & Views section of Nature Physics. The co-authors of the paper include Professor Julia Yeomans and Lisa Moevius from the University of Oxford, UK, and Professor Qian Tiezheng and Dr Xu Xinpeng from Hong Kong University of Science and Technology.
The work is supported by the Hong Kong General Research Fund and National Natural Science Foundation of China.