New infectious diseases: where do they come from? 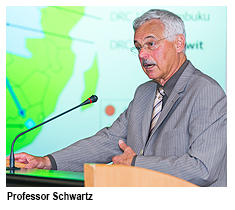 Although new infectious diseases will continue to emerge, often with devastating impacts on human communities, developments in surveillance and biotechnology offer the best tools for mitigating the health threats, said Professor Maxime Schwartz, the former General Director of the Pasteur Institute, at the latest City University of Hong Kong (CityU) Distinguished Lecture on 30 May.
Professor Schwartz argued that research into infectious diseases must continue, repudiating the statement in 1967 by a former Surgeon General of the US that infectious diseases in the US had been eradicated.
“AIDS, Ebola, mad cow disease, SARS, avian flu and chikungunya constitute some of the most well-known examples,” he said in his talk. “How can we explain the emergence of these new diseases? How can we control them? Should we fear the emergence of other new diseases in the future?”
While he acknowledged that infectious diseases have been known throughout history, citing examples such as the so-called Black Death that is reckoned to have wiped out about one-third of the population of Europe in the fourteenth century, Professor Schwartz claimed that the emergence of new diseases over the last 40 years suggested new parameters and contexts.

For example, Legionnaires' is a new disease caused by a bacterium that found a new host when humans began constructing large air-conditioning systems; Lyme disease is the result of humans encroaching into new environments where the ticks that cause the disease are to be found; and Ebola and the AIDS virus are directly linked to human interaction with monkeys and chimpanzees, respectively, he said.
In addition, the ability of pathogens to mutate, in particular the capacity to overcome antibiotics, meant that certain diseases could become too powerful for today’s drugs to combat. TB, for example, can become multi-drug resistant should patients fail to adhere properly to a regimen of prescribed medicines. Other diseases, such as polio, have reportedly reappeared.
“Should we be scared?” said Professor Schwartz wryly towards the end of his talk. Perhaps not scared, but we should be concerned, he concluded, since humans were likely to continue to develop their communities in ways that might create conditions that pathogens find appealing, such as in the case Legionnaires’ disease; and pathogens were unlikely to lose their ability to adapt and evolve.
However, Professor Schwartz heralded pioneering work in the areas of surveillance and biotechnology. Microbiological surveillance in particular can check for the presence of diseases among a given population and in the environment, for example, paying close attention to areas of humidity where mosquitoes can thrive.
Equally promising is the progress made in areas of biotechnology such as diagnostic technologies, vaccines, immunotherapy new antibiotics and genetics.
“We are not totally helpless,” he said.
Professor Arthur Ellis, Acting President, and Professor Lu Jian, Vice-President (Research and Technology), gave welcoming addresses, making special mention of CityU’s new School of Veterinary Medicine which will focus on public health. 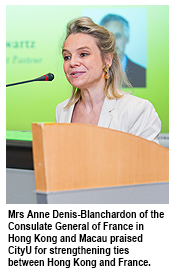 Professor Maxime received his PhD in 1967 and spent two years of post-doctoral
studies in the laboratory of James D. Watson at Harvard University before returning to Institut Pasteur where he remained for most of his scientific career.
The Pasteur Institute is non-profit private foundation dedicated to the study of biology, micro-organisms, diseases, and vaccines that has been at the forefront of the battle against infectious disease since 1887.
During her address, Mrs Anne Denis-Blanchardon, Consul (Culture, Education & Science), Consulate General of France in Hong Kong and Macau, praised CityU for inviting world-class scholars to Hong Kong to share their research, and for strengthening ties between Hong Kong and France.