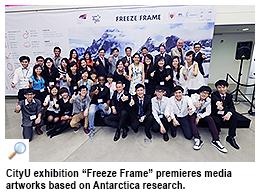 A team of students from City University of Hong Kong (CityU) trekked to Antarctica on an art and science research expedition to find new ways to understand climate change. They transformed data that was collected during the expedition into new media artworks.
Opening on 23 May, an exhibition titled “Freeze Frame” showcased the students’ projects.
The 13 installations, which span the academic spectrum, use emerging technologies such as immersive 3D, robotics and game applications to show the endangered continent from a new perspective. Even the emails sent by the students are included in the exhibition, interpreted by LED displays climbing each balcony in the Run Run Shaw Creative Media Centre, the iconic architectural landmark building at CityU. 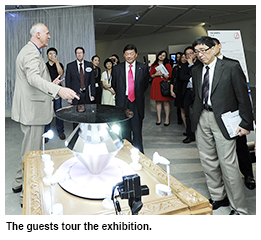 The opening ceremony was officiated by Mr Herman Hu Shao-ming, CityU’s Council Chairman, Professor Way Kuo, University President, and Professor Roderick Wong Sue-cheun, Vice-President (Development and External Relations).
“The show acts as a marker for CityU’s focus on education that extends beyond the classroom and creates exciting contexts for moments of discovery,” explained Mr Herman Hu.
“In English, ‘Freeze Frame’ means to stop a movie at an exact moment to study it in detail. Here too, the students have paused the global changes occurring in Antarctica to observe and learn from the details,” he said.
The Extreme Environments programme began in 2012 with an expedition to the Mojave Desert in California. The acclaimed exhibition that showcased the outcomes of the programme provided many subsequent opportunities for the participating students and validation from the academic community.
Organised by the School of Creative Media, the groundbreaking Extreme Environments programme encourages interdisciplinary student teams of engineers and scientists to partner up with artists and designers. The Antarctica expedition was open to students from any field of study and the projects on display were selected by a team of scientists, artists and engineers.

Professor Kuo said at the opening ceremony that new ideas came from mixing fields of study. “Some of the most interesting questions in research today defy traditional discipline classifications, and demand expertise from across the spectrum of academic fields,” he said.
The team travelled to Argentina backpacker-style, and canoed and hiked through the ecosystem in Tierra del Fuego. They spent 12 days on Akademik Ioffe, a Russian science vessel that has been important in polar research for 25 years, examining multiple sites in Antarctica. The students, working with veteran scientists, conducted a series of zero-impact research studies, collecting over 30,000 pages of datasets and 70,000 photographs.
Professor Arthur Ellis, CityU’s Provost said the programme was a good fit with the University’s Discovery-enriched Curriculum (DEC).
“The DEC enables students to master existing knowledge and learn what it means to create new knowledge by being partners in the process of discovering, innovating and creating,” he said. “We believe that this approach gives our students a better understanding of what it means to explore the unknown.”
The students’ hybrid art and science projects are a surprising mix of important environmental information and a playful use of new technologies. Free from the grip of dry numbers, the students artistically explored the data they had collected.
For example, global warming’s effect on baby penguins is explained through a mobile application that borrows its style from retro Hong Kong newspapers. Microorganisms in the Antarctic waters are displayed on an overhead dome and their DNA interpreted into music. Air pollution is revealed through a towering fabric and light installation. 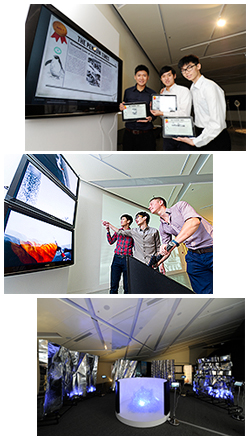 Because the projects encourage creative expression of the science, the data became personalised and more Hong Kong influenced. In a 3D, 360-degree movie, Antarctica’s total lack of artificial light is contrasted with the world’s location with the most, i.e. Tsim Sha Tsui. A dramatic kite-surfing performance in Antarctica was directed by a film student using seven cameras and two sensors to inspire an animation about Hong Kong’s wind-blocking “canyon effect”.
Where possible, the students sourced recycled or sustainable materials for their projects, and every piece will be recycled at the closing of the exhibition.
The programme has proven to be an effective outreach tool for environmental awareness. The students have 10,000+ social network followers and the media coverage has been extensive. The team even arranged and sang a song about the experience and produced an MTV video. SCM is organising tours for secondary students and concerned organisations, too.
The expedition has received funding from sponsors and donors, and the participating students also bore part of the expenses. The students organised an online crowdsourcing campaign and even landed major donors in Kaspersky Software and Lush Cosmetics. The Jackie Chan Charitable Foundation and Jay Chou-backed Ucann.com also financially supported the programme. Eco-tourism leaders One Ocean provided the extra resources needed to assist with the student research onsite and acted as the liaison between the students and the scientists.