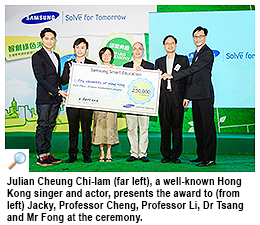 An electronic engineering student from City University of Hong Kong (CityU) has been awarded the first prize in the Samsung Solve for Tomorrow competition by designing a new energy-saving ventilation and air conditioning system.
Jacky Lai Chun-tak, a Year 2 student from the Department of the Electronic Engineering, is the champion in the tertiary institution category of the competition organised by Samsung for the first year. The competition encourages students to use technology to solve environmental issues and create a greener Hong Kong.
Jacky’s winning project is called a “New Concept of Humanised Variable-Air-Volume Air Conditioning System”. He estimated that with the installation of his system, more than 10 percent of energy could be saved per month for an office operating from nine to six.
“The new system can provide better thermal comfort and indoor air quality at a shorter response time within a similar price of the existing system,” he said.
Jacky was awarded $60,000 in cash and $40,000 in Samsung products and $250,000 in products for CityU.
The new system is composed of sets of air supply grilles, luminaires and sensors. The sensors installed externally in each air grille can detect the room temperature, the concentration of carbon dioxide and human motion in each area, and automatically control the supply of fresh air based on the data collected.
“Since each sensor is installed externally, the environment and the requirement of the fresh air can be analysed more accurately, and thus more energy can be saved,” said Jacky.
“The new system is modified from the existing system which is commonly used in offices and universities, so users can only change the existing air grilles to the new sets of air grilles, luminaires and sensors, which create less wasted materials.” 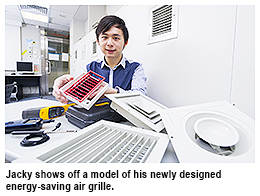 Jacky’s inspiration comes from what he has learned from both his associate degree programme in the Division of Building Science and Technology and his current bachelor’s degree programme in the Department of Electronic Engineering at CityU.
“To me, green means energy saving and carbon footprint reduction,” he said. “Air-conditioning consumes around 50 percent of the energy of a building, so I have realised the importance of reducing the energy at the source and combined what I have learned from my two programmes to modify the ventilation and air conditioning system.”
Mr Alan Fong Ming-lun, Instructor in the Division of Building Science and Technology as well as Jacky’s supervisor for this competition, said that the award was inspiring and proved that CityU students could use practical knowledge to be innovative.
“The humanised variable-air-volume air conditioning system is a practical demonstration using infra-red and carbon dioxide sensors to optimise energy use and achieve thermal comfort perception by different users in the existing air conditioning system,” he said.
Jacky’s ideas will be published in a booklet that will be available to the general public to raise awareness of environmental issues.
Professor Cheng Shuk Han, Director of the Office of Education Development and Gateway Education, Professor Robert Li Kwok-yiu, Associate Dean of the College of Science and Engineering, Dr Tsang Kim-fung, Associate Professor of the Department of Electronic Engineering, and Mr Fong have attended the award presentation ceremony earlier.