A member of the professional community has been appointed by the Chief Executive of HKSAR Government to the Council of City University of Hong Kong (CityU), with effect from 6 April 2014 to 31 December 2016. 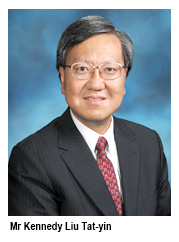 Mr Kennedy Liu Tat-yin is a partner with PricewaterhouseCoopers, who leads the firm’s Capital Market Services in China (including Hong Kong and mainland China). He holds an MBA degree from the University of Warwick, U.K. and is a Certified Public Accountant in Hong Kong.

Mr Liu serves the community in a number of capacities. He is the Chairman of the Employees’ Compensation Insurance Levies Management Board of the HKSAR Government, the Vice-Chairman of The Hong Kong Council of Social Service and the Chairman of Canadian International School of Hong Kong, among other positions.  He also served as an elected Council Member of the Hong Kong Institute of Certified Public Accountants for four years and was a member of the Administrative Appeals Board of the HKSAR Government.