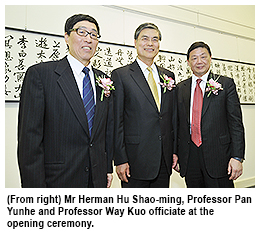 More than 100 Chinese calligraphy artworks from academicians and scholars from Taiwan, Hong Kong and mainland China are being shown in the Singing Waves Gallery and the Run Run Shaw Library from 25 March to 11 May.
All the participating academicians and scholars are leaders in their fields of study, and at the same time they aspire towards the aesthetics of art. They include the eminent Chinese Scholar Professor Jao Tsung-I; Professor Pan Yunhe, Vice-President of the Chinese Academy of Engineering (CAE); Professor He Jishan, Professor Xie Heping, and Professor Xu Yangsheng, members of CAE; Professor Wang Fan-sen, Vice-President of Academia Sinica; Professor Hu Fu, Professor Ambrose King Yeo-chi, and Professor Tu King-ning, members of Academia Sinica; and Professor Cheng Pei-kai, Visiting Professor of the Chinese Civilisation Centre of CityU.
Professor Pan, Mr Herman Hu Shao-ming, Council Chairman, and Professor Way Kuo, University President, were the officiating guests at the opening ceremony. 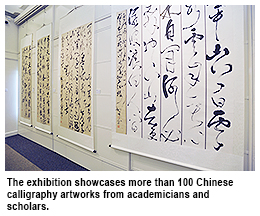 The exhibited artworks cited Chinese classics mainly from Tang, Song and Yuan dynasties. Aligning with CityU’s Discovery-enriched Curriculum (DEC), the aim of the exhibition, which was proposed by Professor Kuo who is a foreign member of CAE as well as a member of Academia Sinica and the US National Academy of Engineering, is to promote culture and innovation among both local and overseas students and to encourage them to excel in their chosen professions by providing an interdisciplinary and multicultural learning environment.
“Calligraphy captures the essence of Chinese culture while Chinese poetry, including the shi of Tang, ci of Song and qu of Yuan, is a precious gem of classical Chinese literature. Now the two have combined to imbue CityU with a rich poetic and artistic aura, bringing a splendid cultural feast to our young campus. I am deeply grateful to the academicians for the dedication they have shown in their creative work,” said Mr Hu in his speech.
140325-2_calligraphy_L.jpg 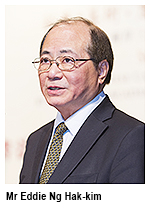 Mr Eddie Ng Hak-kim, Secretary for Education of the Hong Kong SAR Government, delivered a speech as the honourable guest at the “Academicians Forum: Calligraphy and Science – From Skill to Art” held on the same day. Six speakers, including Professor Pan, Professor He, Professor King, Professor Kuo, Professor Tu and Professor Xu shared their views in the forum.
Invited by the 30th Anniversary Organising Committee, Professor Wang Fan-sen, one of the participating academicians of the exhibition, offered insight into the impact of information technology to humanity researchers at a talk titled “The Possibilities and Limitations of Digital Humanities: A Historian's Perspective” on 20 March at CityU. 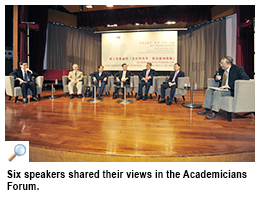 Professor Wang argued that there might be a positive partnership between humanity studies and digital technology. All digital limitations serve to remind researchers to apply information technology to facilitate humanity studies carefully and discreetly while keeping in mind that the essence and philosophy behind humanity studies continue to remain a research centred on humankind.
The exhibition and forum are coordinated by the Run Run Shaw Library, the Chinese Civilisation Centre, and other academic and administrative units of CityU.
For details of the exhibition, please visit: http://www.cityu.edu.hk/lib/about/event/ex_calligraphy2/.