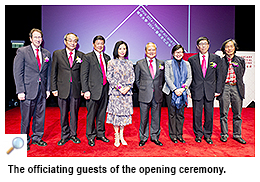 The CityU 30th Anniversary Cultural Festival was opened at a ceremony held at the Run Run Shaw Creative Media Centre (CMC) at City University of Hong Kong (CityU) on 19 March.
The ceremony, titled “CityU 2014－Year of Art and Culture”, launches a year-long programme of artistic and cultural activities in celebration of CityU’s landmark achievements over the past three decades.
The Cultural Festival, which is organised by CityU together with local and overseas partners, runs right through CityU’s 30th Anniversary year, emphasising the University’s profound commitment to serving the Hong Kong community, and reinforcing the University’s preeminent cultural reputation in Hong Kong, Asia and the world. 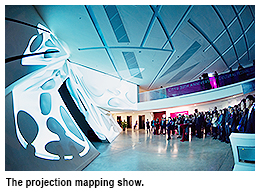 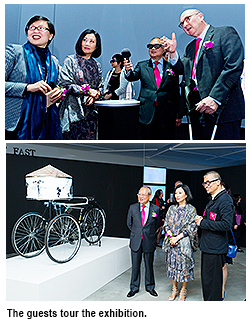 In addition, a new 3D stereoscopic animation made by SCM alumni was screened at the ceremony to instigate the launch of the “Year of Art and Culture” at CityU.
The opening ceremony also served as a platform to showcase CityU students’ traditional and contemporary musical talents, offering the distinguished guests an exclusive preview of the festival’s highlights, such as The Infinite Line, a panoramic 3D art installation with 27 live interactive readings performed by the celebrated Singaporean poet Edwin Thumboo.
Other highlights included an art installation in the stairwell of the CMC, measuring 2.5 metres by 30 metres, which was painted in a live performance by the internationally renowned Chinese calligrapher Professor Wang Dongling and has now been donated to CityU as a 30th anniversary gift. The exhibition Animamix Biennale, in the CMC’s gallery space, is a remarkable spectacle of innovation in the art of animation, showing contemporary photographic, sculptural and video works by 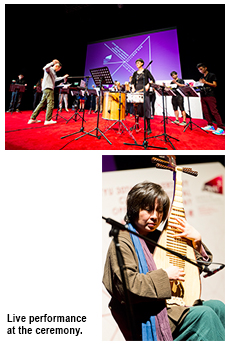 renowned artists living in Hong Kong. Both of these exciting exhibitions are currently open to the public at the CMC.
The Cultural Festival is one of the major 30th anniversary celebratory events. It heralds a year-long art and cultural feast of multimedia events in many genres: photography, music, Chinese opera, animation, Chinese calligraphy, film, video, contemporary art and literature. Tradition and innovation meet in this Festival to offer wonder and enjoyment to every visitor.
Details of the CityU 30th Anniversary celebrations are available here.