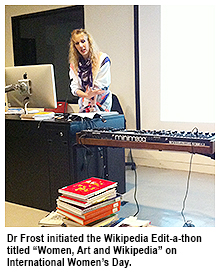 A unique attempt to encourage more women to become regular contributors to Wikipedia, the world’s largest encyclopedia, took place on International Women’s Day on 8 March at the School of Creative Media (SCM), City University of Hong Kong (CityU).
The Wikipedia Edit-a-thon, which was most likely the first of its kind in Asia with such a strong feminist perspective, also set out to have the nearly two dozen participants research and write Wikipedia entries on Hong Kong’s women artists.
“This event celebrates International Women’s Day by generating as many new Wikipedia pages on local female artists as possible,” said one of the organisers, Dr Charlotte Frost, Visiting Assistant Professor in SCM. “With a high gender disparity on Wikipedia—recent statistics suggest only 14% of Wikipedia contributors are women—women’s history is under-represented.”
The volunteers created 12 individual Wikipedia entries at the event, ensuring that Hong Kong’s art history is now better represented on Wikipedia. 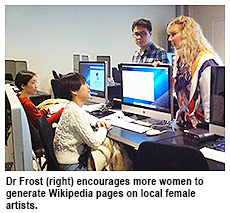 The Edit-a-thon also set out to consider great female artists from Hong Kong from an art history perspective and reflect on the significance of having information accessible through one of the largest online knowledge bases today, according to the organisers.
Computers, basic Wikipedia editing guides and refreshments were provided on the day of the event for the participating contributors, some of whom were experienced Wikipedia editors and some of whom were beginners.
The event was titled “Women, Art and Wikipedia” and is part of Dr Frost’s project, “Arts Future Projects,” which is supported by a CityU teaching start-up grant.