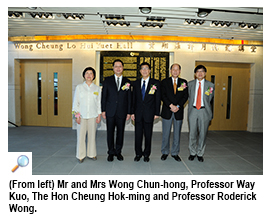 The main lecture theatre in Academic 3 at City University of Hong Kong (CityU) was named “Wong Cheung Lo Hui Yuet Hall” on 11 October after the late Mr Wong Cheung and Mrs Wong Lo Hui-yuet in commemoration of their patriotism and humanitarianism.
The naming ceremony also acknowledged the generous support of their youngest son Mr Wong Chun-hong to CityU.
During World War II, Mr and Mrs Wong Cheung joined the anti-Japanese guerilla force called the Hong Kong-Kowloon Brigade of East River Column which fought the Japanese in a number of battles and rescued some 700 patriotic intellectuals, including He Xiangning, Mao Dun and Zou Taofen, and some 80 British and US prisoners of war.
Mr Tung Chee-hwa, the first Chief Executive of HKSAR, installed a Roll of Honour bearing the names of 115 Brigade martyrs in the City Hall Memorial Garden and Shrine in 1998 in remembrance of their sacrifice and contributions. 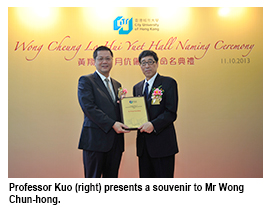 A video about the Hong Kong-Kowloon Brigade of East River Column was shown during the naming ceremony. Mr Wong Chun-hong spoke about his parents’ involvement with the Hong Kong-Kowloon Brigade of East River Column.
A philanthropist who has made significant contributions to education in Hong Kong and the mainland, Mr Wong Chun-hong is the Founder, Chairman and Chief Executive Officer of Top Spring International Holdings Limited and a member of the Guangzhou Committee of the Chinese People’s Political Consultative Conference. His donation supports the strategic initiatives and student exchange programmes of the University. 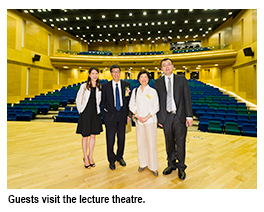 Guests officiating at the ceremony were Mr Wong Chun-hong, The Hon Cheung Hok-ming, Executive Councillor and a member of the Chinese People's Political Consultative Conference, Professor Way Kuo, University President, and Professor Roderick Wong Sue-cheun, Vice-President (Development and External Relations), CityU.
In the opening address, Professor Kuo said, “China has gone through dozens of wars since 1840. We can enjoy our lives today thanks to the sacrifice and contributions of the elder generations. The main lecture theatre in Academic 3 is currently the best equipped lecture theatre in CityU and a milestone of the University’s development in the 21 century. We are very pleased to name our best lecture theatre Wong Cheung Lo Hui Yuet Hall to thank the elder generations for the sacrifice they made.”
Located in Academic 3, Wong Cheung Lo Hui Yuet Hall comprises an auditorium on Level 5 and a balcony on Level 6, providing a seating capacity of 600.
The Hall is equipped with advanced multimedia audio-visual systems, supporting the provision of simultaneous interpretation and video conferencing services. It is currently the largest venue for conferences and performances in the University.