​
The grand opening of Academic 3 (AC3) at City University of Hong Kong (CityU) on 6 May marks a significant milestone in the development of the University, providing the extra space needed to take the University to another level. 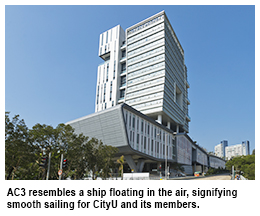 The building resembles a ship floating in the air, signifying smooth sailing for CityU and its members. It also signifies the University’s commitment to fostering a sense of the Hong Kong spirit of supporting one another sailing in the same boat.
Officiating guests at the opening ceremony were The Hon Leung Chun-ying, Chancellor of CityU, Dr Norman Leung Nai-pang, Pro-Chancellor of CityU, Mr Herman Hu Shao-ming, Council Chairman of CityU, and Professor Way Kuo, President of CityU.
In his welcoming remarks, Mr Hu said the completion of AC3 would help CityU achieve its mission, which is to become a leading world-class hub for professional education and academic research. 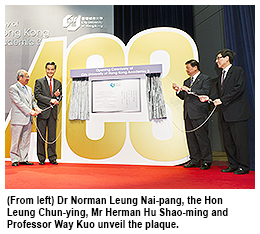 In our relatively short but truly exceptional history, CityU has undertaken many new initiatives. We established the School of Creative Media in 1998, the School of Energy and Environment in 2009, and we are in the process of creating Hong Kong’s first-ever School of Veterinary Medicine. AC3 is a continuation of this desire to innovate and pioneer in the local higher education sector,” he said.
Dr Norman Leung Nai-pang said he had witnessed the tremendous rate of progress that CityU had made since he first became acquainted with the University in 1985. “AC3 is part of a suite of projects and activities transforming CityU,” he said.
Mr Leung Chun-ying said, “I am very encouraged by the remarkable developments and achievements of this university. CityU embodies the Hong Kong spirit. From its humble beginning in 1984, it has made huge progress in less than three decades. Last year, in the Times Higher Education 100 Under 50 ranking exercise of the world’s best young universities, three of our universities ranked in the top 20, including CityU.” 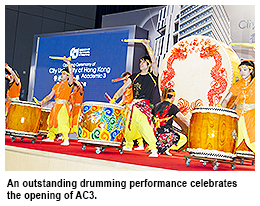 AC3 comprises a 20-storey upper block and a 5-storey lower block, adding an additional 20,500 square metres of net area for learning, research, administration and social interaction to our vibrant campus. It houses a state-of-the-art 600-seat theatre, the State Key Laboratory of Millimeter Waves, an alumni lounge, a sky garden, restaurants, classrooms and learning commons, multi-function rooms and administration offices.
It is not only the largest capital project in the University’s history, it is also a building for the 21st century, combining sustainability and green features that support environmental protection. It has received a merit award under the “New Building-Hong Kong” (Building Under Construction) category of the Green Building Award 2012 in recognition of its green initiatives. For example, windows exposed directly to sunlight are made of low-emissivity glass, which reduces the temperature in the building and the energy consumption of the air-conditioning.
Professor Kuo thanked everyone at CityU for their work in bringing this project to completion in his vote of thanks, and he thanked our neighbours in Kowloon Tong for their tolerance during the construction period. He especially thanked Mr Chan Ka-kui, Council member of CityU, for his dedication and great support in this project.
More than 300 guests attended the ceremony and a guided tour was arranged for the guests after the ceremony.