Former President talks on the birth and growth of Islam

Professor Chang Hsin-kang, former President of City University of Hong Kong (CityU), reviewed the birth and growth of Islam at a talk on 23 January. The title of his speech was “The Enterprise of a Camel-Carried Tradesman: Birth and Growth of Islam.” 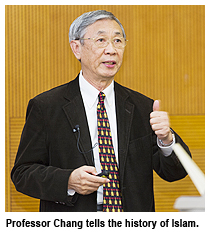 Professor Chang began his talk by discussing the classical era when four great empires reigned, including the Roman Empire in Europe and the Han Empire in China. In the 4th and 5th centuries, the nomadic peoples of northern Eurasia started to move south, then in the 7th century the Christian Byzantine Empire battled with the Zoroastrian Sassanid Persian Empire for hegemony. Between the two was the Arabian peninsula, where people belonged to various tribes and believed in polytheism, worshipping various idols.
Mecca, a city on the western part of the peninsula, rose as an east-west transportation hub and trading centre. Afterwards, Muhammad (570–632), a local businessman, claimed to have received a revelation from Allah through the Archangel Gabriel. This led to his founding of Islam, a religion that believes in only one God and rejected any form of idol worship. He began to preach, but then came the persecution. Muhammad had to flee Mecca and emigrated to Medina with his followers in the year 622. There, they later established a theocratic Islamic state.
In the next century, by virtue of its control over vital trade routes connecting Europe, Asia and Africa, the Muslim world expanded rapidly, spreading to vast regions across the Arabian Peninsula, west Asia, north Africa, and central Asia, areas that soon became Islamised, parts of which even Arabicized. 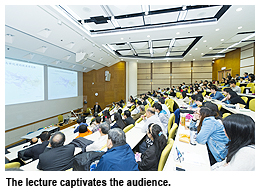 In medieval times, the Islamic civilisation boasted one of the best in the world, making brilliant achievements in astronomy, mathematics, physics, chemistry, medicine, pharmacology, geography, philosophy, history studies, literature, art, music and architecture, all of which have made great contributions to the growth of global civilisations.
In his talk, Professor Chang also explained the origins of the sectarian division between Sunnis and Shiites, the two main sub-groups within Islam, along with some historical milestones such as the Crusades of medieval Europe, and the Mongolian military expeditions into west Asia and east Europe in the thirteenth century.
By showing some slides made from the photos he had taken himself in travels to many Islamic historic sites, Professor Chang added spice to his lecture. 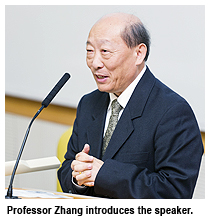 The lecture was hosted by the Department of Chinese, Translation and Linguistics (CTL） of CityU. In his introductory remarks, Chair Professor Zhang Longxi of CTL praised Professor Chang for his width and depth of knowledge, including that of Islam, in addition to his specialised field, namely biomedical engineering.
When winding up his lecture, Professor Chang said he knew little about Islam during his school years. He began to be interested in the Islamic culture in the early 1980s; since his retirement in 2007, his studies and lectures have focused on the history of exchanges between various cultures. He went on to point out that one should have at least some knowledge of the origin and evolution of Islam, whether for the sake of appreciating the beauty and diversity of world civilisations, grasping the current international affairs, or understanding the spiritual pursuits of mankind.
​