Professor Way Kuo, President of City University of Hong Kong (CityU), led a CityU delegation to Shanghai and Hangzhou in China from 20–23 August 2012. The delegation paid visits to research institutes and universities and explored opportunities of future collaborations. 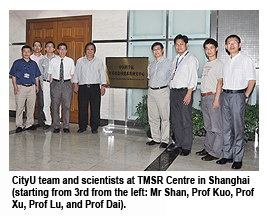 At the TMSR centre, the CityU team held talks with Professor Xu Hongjie, Director of the TMSR Centre, and Professor Dai Zhimin, Deputy Director, among other experts. Professor Lu outlined the current situation and the future development of nuclear energy research in CityU as well as the new undergraduate programmes related to nuclear energy. The two sides also discussed the prospect of future cooperation.
SSRF, arguably the biggest scientific platform for science research and technology development in China, enables hundreds of scientists and engineers from universities, institutes and industries in domestic and even overseas to do research, experiments and R&D by using SSRF facilities day and night. When it was launched in 2004, there were doubts whether it could be built within three years as scheduled and someone even questioned its utilities. But it proved that SSRF was established on schedule, and moreover, its facilities are in short supply. So far just a quarter of applicants can be accepted while most are on the wait list. 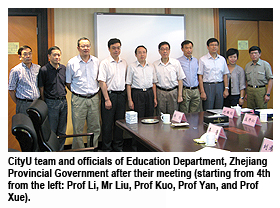 During their trip to Hangzhou, accompanied by Professor Li Lu, Deputy Director General of Education, Science and Technology Department, the Liaison Office of the Central People's Government in the Hong Kong SAR (LOCPG), Professor Kuo, Professor Xue, and Professor Yan held discussions with Mr Liu Xiping, Director-General of the Education Department in the Zhejiang Provincial Government, Mr Weng Jianjun, Director General of the Publicity Department in the Hangzhou Municipal Government, and other government officials.
The delegation also visited China Jiliang University, Hangzhou Normal University, Zhejiang University and Zhejiang Agriculture and Forestry University, and had talks with their management and experts. Zhejiang A & F University highlighted their strengths in research, teaching and learning in animal science, showing interest in cooperating with CityU.
During their visits, Professor Kuo and his team met with Professor Lin Jianzhong, President of China Jiliang University, Mr Cui Pengfei, CPC Party Secretary of Hangzhou Normal University (HNU), and Professor Ye Gaoxiang, President of HNU, Professor Sun Youxian, Academician of Chinese Academy of Engineering, and Director of the State Engineering Research Centre for Industrial Automation at Zhejiang University, Professor Zhou Guomo, President of Zhejiang A & F University; and other leaders of those universities.
​