Leung Ka-ming, a Year 2 applied social studies student at City University of Hong Kong (CityU), came third in the Men’s Individual Épée Category in this year’s Fencing Asian & Oceanian Olympic Qualification Tournament to become the first épée fencer to represent Hong Kong in the Olympics. Fencing has helped build his drive and focus, and the support of his family, friends, teachers and classmates from CityU over the years has enabled him to overcome any obstacle in his path. 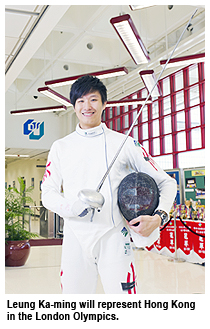 Leung Ka-ming took up épée fencing at the age of 13. Over the past 10 years, he has won multiple medals in inter-school competitions. Since Form 4, Leung has represented Hong Kong at various international events such as the Asian Junior and Cadet Fencing Championships, the Asian Fencing Championships and the World University Games.
“Fencing is as an elite sport under the Elite Training Programme at The Hong Kong Sports Institute. But it doesn’t mean that all six fencing categories have direct funding. Before épée fencing qualified for funding in 2010, we had to pay all our own travel and accommodation expenses in order to take part in overseas competitions. It was a heavy burden to me,” Leung Ka-ming explained.
The six fencing categories practised in Hong Kong are men’s épée, women's épée, men’s sabre, women’s sabre, men’s foil, and women’s foil.
Because of his financial difficulties, he thought of quitting. It was thanks to his family and friends that he managed to pull through. One of his most supportive friends is Mr Wu Siu-cheung, a CityU alumnus. 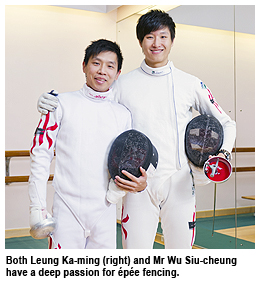 Mr Wu started fencing when he was nine and worked as a fencing coach upon graduation from the Department of Electronic Engineering at CityU.
“It is common practice for us to get jobs to sustain ourselves while we are establishing ourselves as professional fencers, and we often look out for one another,” Mr Wu said.
Together with teammates Leung Ka-ming, Mr Lau Kam-tan and Mr Tsui Yiu-chung, Mr Wu won the bronze medal in the 2010 Asian Fencing Championships Team Épée.
“Not only did Mr Wu Siu-cheung loan me the money to cover the expenses for overseas competitions, he also introduced me the CityU’s Student Athletes Admission Scheme,” Leung Ka-ming said.
In 2006, Leung obtained his qualification as a fencing coach and was therefore able to self-finance his own trips with the income he earned. Also, as a CityU student, he has qualified for financial assistance from the University to participate in international competitions.
Leung Ka-ming has indeed given much of himself to the sport. His extracurricular activities have involved either training or coaching. However, he says what he has gained was well worth the sacrifice.
“In addition to the assistance of family and friends, I have also had support from the teaching staff and my classmates at CityU. I am particularly grateful to Dr Kam Ping-kwong, Dr Lee Tak-yan, and Dr Leung Lai-ching in the Department of Applied Social Studies,” Leung Ka-ming said.
“I’ve learnt not to give up under any circumstances. In this year’s Fencing Asian & Oceanian Olympic Qualification Tournament, the Iranian fencer I was facing outperformed me every time we met, but I beat him this time. I will maintain this attitude in the London Olympics,” he said.
Recently returned from a training camp in Hungary, Leung Ka-ming will leave for the London Olympics on 25 July. For the first time in Hong Kong’s fencing history we have six athletes representing the SAR in the Games.