Diligence and persistence are two vital requirements for success, the President of City University of Hong Kong told students at a series of recent graduation ceremonies held at local secondary schools.
Professor Way Kuo was addressing F6 and F7 graduates at SKH Tsang Shiu Tim Secondary School, Lai Chack Middle School and Pui Kiu Middle School between 1 June and 3 June.
In his talks, Professor Kuo said important decisions made at critical times, such as furthering one’s studies at university, selecting academic programmes or choosing a career path, could have a far-reaching impact on one’s life. He cited the “butterfly effect” from chaos theory, the proverb “For Want of a Nail” and the classical Chinese story “Yang Zhu Crying at a Forked Road”.
“Life is a marathon,” he said. “How fast or slow you run at a particular point will not determine your finishing time. Similarly, your entire life will not depend on your performance at a certain time. Graduation from a famous university may win you a job interview, but your overall success depends on your capability and diligence.”
One’s interests, personality and capabilities should be the top priority when choosing an academic programme and institution for tertiary education. Conversely, you should not follow what most people do and pursue only popular academic programmes or famous universities with a high ranking, he said.
From his own knowledge and experience as well that of his acquaintances, Professor Kuo said, people are passionate only about things that really interest them. A high level of enthusiasm would sustain perseverance and hard work, and lead to eventual success, he said. 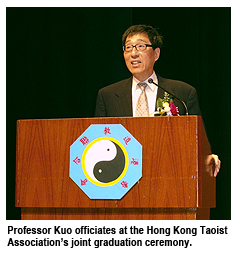 In addition, the Hong Kong Taoist Association invited Professor Kuo to be their officiating guest at a joint graduation ceremony on 31 May for their affiliated primary and secondary schools. In his address, he used the philosophy of Taoism to explain the wisdom of tackling difficult tasks.
Quoting from Laozi’s Tao Te Ching, Professor Kuo said, “For the most difficult task, we should start to work on the easiest part. For the largest project, we should start with the smallest part. The key to success is to find out the proper way of dealing with the whole issue. Don’t just sit there with high aims or ambitious goals without doing anything. Rather, we should earnestly do the work. To start with something small, we may ultimately accomplish a major mission.”