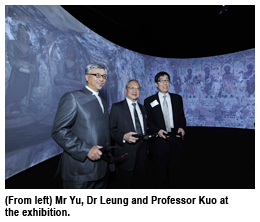 A world premier event at City University of Hong Kong (CityU) on 16 March marked a milestone in new methods of archeological exhibition for museums, digital interpretation, and sustainable preservation.

For the first time ever, visitors could experience in virtual reality the magnificent Buddhist wall paintings inside Cave 220, part of the famous Mogao Grottoes at Dunhuang in Gansu province, China.

The opening ceremony for the unique “Pure Land: Inside the Mogao Grottoes at Dunhuang” exhibition was co-presented by CityU’s Applied Laboratory of Interactive Visualization and Embodiment (ALiVE) and the Dunhuang Academy. It was supported by the Friends of Dunhuang Hong Kong. 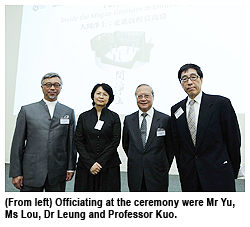 Dr Leung said CityU was honoured to play a role in the preservation of Dunhuang’s world-class heritage. “‘Pure Land’ demonstrates how we can help protect these and other cultural treasures,” he said. Cave 220 is seldom open to the public for fear of damaging the fragile works of art inside. 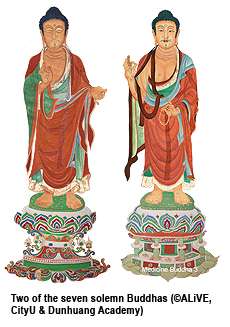 “I brought about this cooperation because I was so impressed by CityU’s creative media technology,” said Mr Yu. “This technology is the best way to introduce the art of Dunhuang to the public because the paintings do not get damaged and there is a strong education and promotional purpose.”

“This exhibition is a fresh effort to protect and promote cultural heritage,” said Ms Lou.

Professor Kuo thanked everyone involved in the project. “CityU is committed to being a leading global university, one that spearheads change in Asia in support of social and economic advancement. ‘Pure Land’ has helped us move one step closer to this vision,” he said. 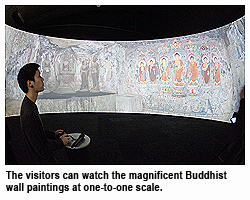 The exhibition will be open from 17 March to 7 April. It brings to life the story of Bhaisajyaguru (Medicine Buddha)’s Eastern Paradise as a single composition on the north wall of Cave 220. The detailed mural, dating back to 642 CE, is a masterpiece of early Tang Dynasty art, depicting the seven emanations that Bhaisajyaguru could assume as a healer.

Thirty experts contributed to this project over a six-month period, helping to develop an extraordinary animated 3D experience that allows visitors to experience the paintings by immersion in a large 360-degree panoramic projection theatre. The virtual reality technology lets people feel as if they are actually inside the cave viewing the paintings in real life. 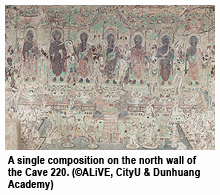 Under the guidance of art historians and experts on the murals, a group of animators used laser-scanned data sets and ultra-high resolution photographs of the north wall provided by Dunhuang Academy to imitate the brush strokes and colour of the originals and to re-draw selected elements on transparent paper. The images created by this meticulous process were digitised and integrated into the animation scenography, including the 3D reconstruction of the illustrated musical instruments and the canopies above the Bhaisajyaguru. The experts even invited members of the Beijing Dance Academy to re-enact the dances in the murals.

The animation techniques were supplemented by software-generated digital effects such as the “virtual torch” and “virtual magnifying glass”. These tools allow viewers to simulate the movement of torch light in the cave and zoom in on the painted surface of the murals to see its details in ultra-high resolution.

The easily transportable display system, called Advanced Visualization and Interaction Environment (AVIE), is the best system for presenting “Pure Land” because it can cope with the large size of the exhibition and the seamless 3D projection process.