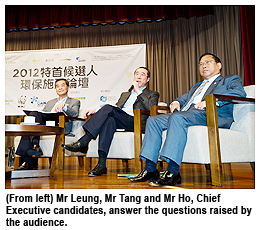 Over 500 people attended the 2012 Chief Executive Candidates’ Environmental Policy Forum, which was co-sponsored by City University of Hong Kong (CityU).

CityU’s participation in the Forum on 3 March demonstrated the University’s commitment to social responsibility.

The three Chief Executive candidates, Mr Albert Ho Chun-yan, Mr Leung Chun-ying and Mr Henry Tang Ying-yen, met for the first time on the same stage to present their policies on environmental issues. The event was organised by the Clean Air Network, Friends of the Earth (HK), Greenpeace, and WWF-Hong Kong. Support came from CityU and CityU’s Governance in Asia Research Centre (GARC). 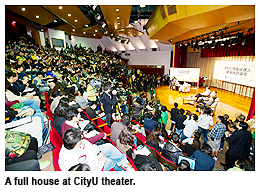 The response to the Forum, staged in the Wei Hing Theatre, was overwhelming. A live feed had to be streamed into CityU’s lecture theaters so more members of the public could participate. 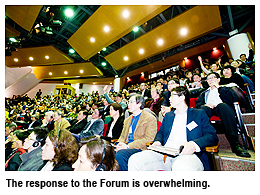 CityU has taken the lead in promoting sustainability on campus and improving environmental performance as part of its commitment to social responsibility. For example, the University signed the Charter on Cutting Food Waste with 10 other local tertiary institutions and installed solar panels for heating hot water on campus.

GARC, based in the College of Liberal Arts and Social Sciences, undertakes interdisciplinary work on public institutions, public management and public policy within the broad domains of applied social sciences and applied philosophy. The conferences, seminars, forums and workshops hosted by the Centre promote academic exchange and public awareness about various public policies, including environmental policies and governance in Asia.